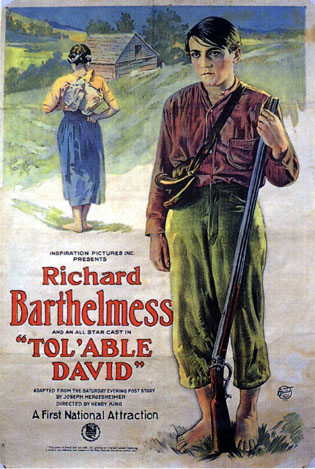 Tol'able David is a 1921 silent film directed by Henry King, based on a short story by Joseph Hergesheimer. Richard Barthelmess stars as David Kinemon, a teenaged boy in the bucolic rural town of Greenstream, Virginia, who lives with his parents and his older brother Allan. David longs to prove himself as a man, but his family still looks at him as a boy, and only "tol'able" (tolerable). David courts pretty Esther Hatburn, who lives on the farm next door, but she too sees him only as "tol'able". Allan won't let David help with the family business—driving the mail cart around the area—and when Allan's wife has a baby, David is judged too young to have a celebratory cigar.

Things turn quite a bit darker when three criminal Hatburn cousins flee across the state line into Greenstream and commandeer the family farm where Esther and her grandfather live. Grandpa Hatburn is too scared to do anything about his criminal cousins, and nobody else does anything until Luke Hatburn, the most unhinged of the three hoodlums, kills David's dog. An outraged Allan vows revenge, which is short-circuited when Luke throws a large rock that hits Allan in the back, leaving him paralyzed from the waist down. Things get even worse when Pa Kinemon suffers a fatal heart attack from the stress. The situation further deteriorates for David, until he has a final confrontation with the Hatburn clan.

Tol'able David is considered one of the great works of American silent film, and was selected for preservation in the National Film Registry. Compare Stark Love, a 1927 film also in the Registry that offers a far darker take on life in Appalachia.