Fanfic / What if Nappa Turned Good? 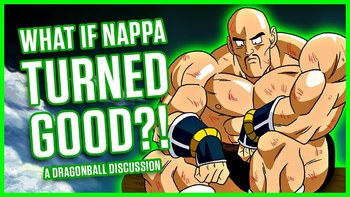 What if Nappa Turned Good? is a Dragon Ball What If? fanfic by Lawrence Simpson aka MasakoX of Team Four Star fame as part of his Dragon Ball Discussion series of Youtube videos. This particular topic started on November 30th, 2017, seven months after the first video of his What If Raditz Turned Good? series, and three days after the release of the eighth part. This series actually started as a result of Masako's friends in Team Four Star playfully teasing him about the Raditz story and asking if he'd do the same for Nappa.

As the title suggests, he explores his interpretation of an alternate version of the story where Nappa avoids his death in the Saiyan arc from Vegeta's betrayal, ultimately joining forces with Goku and the other Z Warriors, and seeing how the events would continue to play out through the incoming threats of the series. As of Part 18, the story has gone from Nappa's introduction in the Saiyan Saga all the way up to the beginning of the Universe Survival Saga in Dragon Ball Super.

What If Nappa Turned Good? has the following tropes: