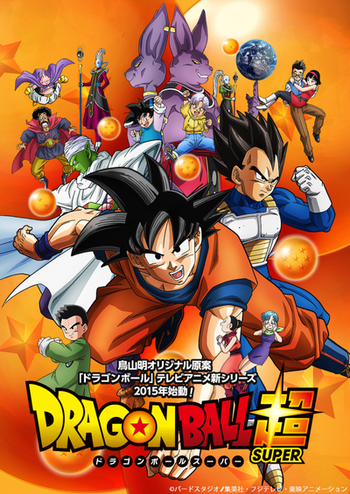 A whole new universe of adventures for Goku and friends... and then some!
Goku: We'll never stop getting stronger!
Vegeta: Of course we won't! Only a fool would put limits on the strength of the Saiyan race!

Dragon Ball Super is another continuation of the Dragon Ball series, consisting of both an anime and manga, with their plot framework and character designs handled by franchise creator Akira Toriyama. While technically not Anime First, the manga and anime versions of the series run side-by-side, occasionally passing each other, with the anime usually ahead. The manga version began serialization on June 21, 2015, while the anime was broadcast in Japan from July 5, 2015 to March 25, 2018. Information on the former can be found here.

Taking place after the "Majin Buu" Saga but before the manga's Distant Finale, Super begins with a retelling of the events of Battle of Gods and Resurrection ‘F’, comprising the first twenty-seven episodes. The new story begins when Goku and the others must search for the Super Dragon Balls to participate in a tournament between universes to determine who acquires the Earth of Goku's world. This in turn leads to the start of new battles against much stronger opponents then they ever faced before.

There are two separate English dubs. FUNimation's dub was first broadcast on [adult swim] in the United States; premiering on January 7, 2017 at 8pm followed by an encore in Toonami. Meanwhile, Bang Zoom! Entertainment dubbed Super for Asian markets; where it was broadcast on the Toonami channel in Asia. The official subtitled simulcast is available on Crunchyroll, Daisuki, and AnimeLab.

An anime film sequel, Dragon Ball Super: Broly, was released on December 14, 2018 and its story is set after the events of the "Universe Survival" arc; development on a second film was confirmed in June 2019. Meanwhile, the manga would continue uninterrupted and entered a new story arc of its own in November 2018. In addition, the first story arc of Super Dragon Ball Heroes, a web series based on the arcade game of the same name, began on July 1, 2018 and is also set after the events of the anime.

It is not to be confused with Super Dragon Ball Z, a fighting game made by Bandai Namco and published by Atari in U.S.

Has a Recap page; please contribute. You can vote for your favorite saga here.