As a Moments subpage, all spoilers are unmarked as per wiki policy. You Have Been Warned! 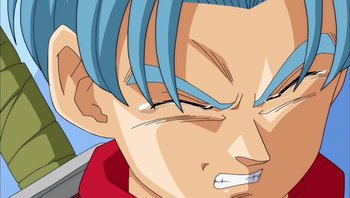 "I failed, Gohan. I failed you. I couldn't save them."
Advertisement:

Despite it being a more lighthearted series than its predecessor, Dragon Ball Super has plenty of emotional and tearjerking moments, and one story arc can be called the darkest in the entire franchise, period.