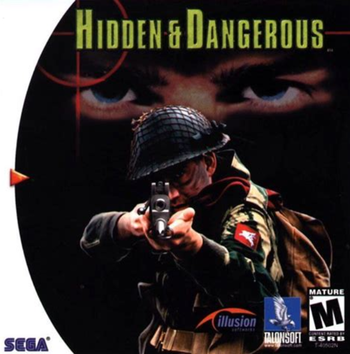 Hidden & Dangerous is a first-person/third-person shooter focused on tactical gameplay, released on PC in 1999. It was developed by the Czech company Illusion Softworks and was later ported to Dreamcast and PlayStation.
Advertisement:

The game has the player control a variable four-man squad of British SAS commandos through six campaigns across Europe in World War II. The player can choose their campaign loadouts from a pool of men and equipment, and similar to other games in the genre such as Rainbow Six and Ghost Recon, soldiers who die during missions remain permanently dead. H&D is one of the pioneers of squad-based tactical gameplay, featuring a 3D tactical map accessible during missions and containing a robust command system, as well as varied missions with objectives ranging from sabotage and prisoner rescue to simply escaping from enemy territory.

An Expansion Pack, known as Fight for Freedom in Europe and Devil's Bridge in North America, was quickly released in the same year, adding new soldiers, weapons and missions. The base game and expansion were later released for free in 2003 as an updated Deluxe edition. The sequel, Hidden & Dangerous 2, was released later the same year.