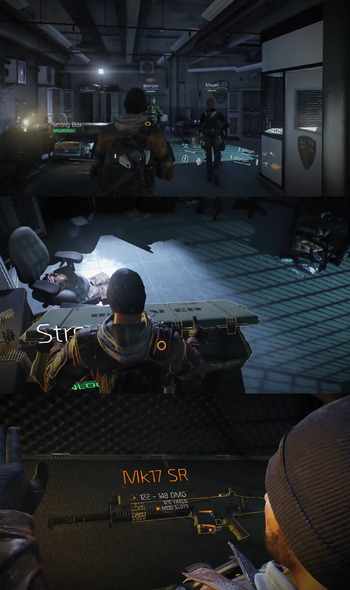 Don't mind me officer, I'm with the government and I'm here to help.note Help myself to a sniper rifle, at least.
Roy Campbell: As usual, this is a one-man infiltration mission.
Solid Snake: Weapons and equipment OSP (on-site procurement)?
Roy Campbell: Yes. This is a top-secret black op. Don't expect any official support.
— Metal Gear Solid
Advertisement:

In several games, the player has to gain various upgrades (whether they are healing items, weapons, or other equipment) that are scattered throughout most of the game. Sometimes the item cannot actually be procured due to not being experienced yet, and requiring a backtrack to get it later.

Although several of the weapons and equipment are required for the plot to advance, there are also things such as ammo upgrades or health bar upgrades that are not actually necessary for anything other than a 100% completion.

The name for the trope comes from the Metal Gear series, where the action pertaining to getting most of these weapons and equipment upgrades was referred to as On Site Procurement. It's an easy justification for the hero getting sent out to save the world With This Herring. The official explanation is that any items given to the hero might be used to trace back to who sent them; because, of course, No Such Agency exists. Similarly, this also serves as a good justification for Bag of Spilling.