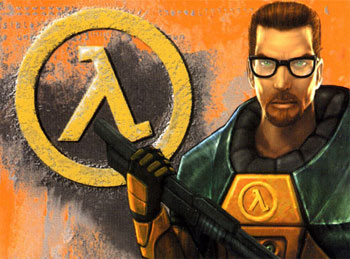 Run. Think. Shoot. Live.
"Good morning, and welcome to the Black Mesa Transit System. This automated train is provided for the security and convenience of the Black Mesa Research Facility personnel..."
— Inbound
Advertisement:

Half-Life, by developer team Valve and originally published by Sierra in its final years, is the first in the Half-Life series and follows a day in the life of physicist Gordon Freeman, a bearded, bespectacled Heroic Mime who works in the Anomalous Materials laboratory at the vast Black Mesa Research Facility, a top-secret complex in the middle of the New Mexico desert. While performing a test on a strange crystalline substance, Gordon accidentally initiates a 'resonance cascade' — an event which causes bizarre, violent creatures to be spontaneously transported from another dimension. Now Gordon must work his way across the base in pursuit of a way to close the dimensional rift, fighting off not only the acid-spewing, electricity-shooting, zombifying aliens but also the Hazardous Environment Combat Unit (HECU), a special unit under the US military, who have swarmed into the complex and are destroying the creatures and silencing the facility's personnel with equal vigor.

Notable for its total immersion of the player. The game is entirely played in first person and in real time, with very little sound not produced by actions in the game world, and no sounds at all made by the central character; also, there are few cutscenes (and even they let you look around during them) — the player has control of the character at all times, and the story unfolds entirely in-game.

The designers actually had great difficulty with the level design at first, and got stuck in a rut. In order to take stock, they created a single level containing every gimmick, enemy, and bit of level furniture that they had come up with for the game so far. Said level was fantastic, and they realized that this density of set pieces was the "certain something" the game lacked.

Gearbox Software made three official Expansion Packs for the original game, which act as POV Sequels for the main plot. They are as follows:

An official class-based multiplayer modification, Team Fortress Classic, was also available as a free add-on for all owners of the original retail version of Half-Life, and was included in most subsequent versions as well (e.g. the Game of the Year Edition).

Gearbox took some liberties towards the storylines, which still causes fan disputes to their canonicity; as Word of God by the series' main writer, Marc Laidlaw, has deemed them semi-canonical until further notice, some label them as Fanon Discontinuity, while others ferociously defend their being canonical — due in no small part to Adrian Shephard's status as an Ensemble Dark Horse.

The game engine was also famous for being highly customizable, leading to a long series of mods. Some of them were single-player, such as Gunman Chronicles and They Hunger,note The Western and Survival Horror/Zombie Apocalypse while famous multiplayer mods include Deathmatch Classic, Ricochet, Day of Defeat , Natural Selection, The Hidden , and Afraid of Monsters.note Repectively: old school Quake-style combat; fast-paced Quake III: Arena-style action; TRON-esque energy disc battles, as you hop between platforms; a gritty World War II combat simulation; aliens vs. Space Marines, in a cross between first person shooter and real time strategy; Survival Horror/Stealth-Based Game; and Survival Horror/Stealth-Based Game. Especially notable of all mods are Team Fortress and Counter-Strike, both of which have famously ascended to independent games in their own right (and adopted by Valve themselves); because of this, Half-Life and its mods are collectively one of the most influential games of all time.

A sequel, Half-Life 2, which would prove no less influential, was released in 2004. Half-Life and its multiplayer mode were ported to Half-Life 2's Source Engine as Half-Life: Source and Half-Life Deathmatch: Source, though were otherwise mostly unchanged.

In September 2012, Black Mesa, a comprehensive Fan Remake that recreates the entire game in the Source engine, was released, after over eight years of waiting. After almost eight more years, the final 1.0 version was released in March 2020.

In early 2013, with Valve's push to get Steam on Linux, they ported Half-Life 1 to Linux, as well as macOS.

If you enjoyed this game, or want to watch it instead of play it, do check out Freeman's Mind.