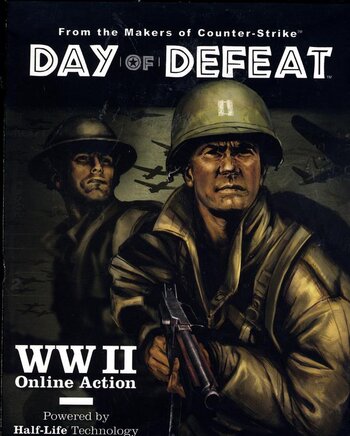 Back the attack.
Day of Defeat is a team-based multiplayer first-person shooter video game from the creators of Counter-Strike that like its predecessor began life as a Game Mod for Half-Life before being picked up by Valve and given a retail release. Set in the year 1944 during the Second World War, specifically the European theatre, the game features two opposing teams, the Allied Forces and the Axis Powers, competing against each other in Capture the Flag and attempts at detonating each other's structures first. The game has a heavy emphasis upon realism, teamwork and co-operation. Adding to the atmosphere of the game, any players killed will need to wait for a "reinforcements" timer to tick down before they respawn as the next wave of troops. The game features several different classes for the player to play as, although unlike in Team Fortress Classic these classes are mostly the same besides their weaponry.
Advertisement:

In 2005, it received a Updated Re Release in the form of Day of Defeat: Source.