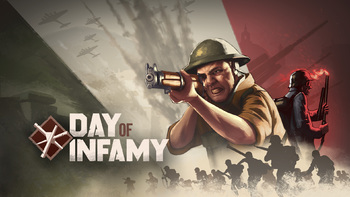 Day of Infamy is a 2016 FPS videogame made by New World Interactive and a sort of Spiritual Successor to the popular Valve mod, Day of Defeat. Initially a mod from their previous game, Insurgency (which also came from a mod based in Valve's Source engine), it became immensely popular among the playerbase and was released as a separate game on Steam's Early Access on 29 July 2016.

Set in World War II, it follows the same formula of realistic gunplay, minimalist HUD and unforgiving player-life expectancy as its predecessor Insurgency, while adding more playable factions, historical weapon choices, classes with unique traits and a radio system with which squad leaders are able to call in air support to help their team.

The game started in Early Access beta, releasing on July 28th, 2016, with a full release following on March 23rd, 2017. You can check out their webpage here

or buy the game on Steam

"I need a wireless over here!"