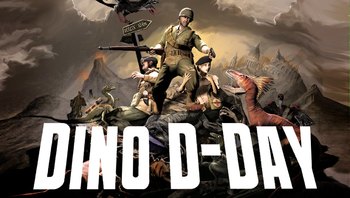 Hey, Amerikaner, yu like ya new pets?
"Dinosaurs exist and the Nazis have them!"
— Dino D-Day Homepage
Advertisement:

is a 2011 First-Person Shooter for the PC, developed by 800 North and Digital Ranch, set in World War II... more or less. There is one minor difference: Those Wacky Nazis cloned dinosaurs. Training them to fight the Allies and equipping them with guns and armor, the Nazis gain a terrifying new advantage. In the game, you play as either the Allies or the Axis (which despite the name has no Japanese or Italian characters) and can play in several classic first person shooter game modes such as control points, deathmatch, and king of the hill. A cooperative Multi-Mook Melee game mode, titled "Last Stand", is also available as paid DLC.

The Axis has eight playable characters, plus two map exclusive dinosaurs. As the inventors of the cloning process, they have the majority of playable dinosaurs. These include the Stygimoloch, a fairly average quadruped with a back mounted machine gun, the Velociraptor, a fast but fragile predator that can pounce on a victim, leaving seconds for teammates to save them, the Desmatosuchus, a very tanky but slow quadruped with a mounted Anti-Air gun (which is never used on aircraft in game), the Dilophosaurus, a fairly tough and fast dinosaur that can knock targets over with a charge and throw goats and downed enemies, the Microraptor, a bird-like dinosaur that can glide, cling to walls, and spit acid to blind enemies, and the compy, a small, fast, but very fragile dinosaur with a grenade strapped to it that can be detonated at any time. Additionally, Karl Hissman can summon kamikaze pterosaurs, the T-Rex and Styracosaurus can be played in specific maps, a Mosasaur can be found in a certain map and will kill ANY player that touches it, and a Triceratops existed in the since removed single player beta. Many more are referenced in-game and in-lore, but are not seen in-game, such as the Plesiosaur, Deinosuchus, and Dunkleosteus. In addition, the Axis has three human characters, the previously mentioned Karl Hissman, a devoted Nazi sniper, Kurt Streicher, a fairly average soldier with no special abilities, but few weaknesses, and Wolfgang Von Graff, The Medic for humans and dinosaurs alike, but far from harmless in his own right.

The Allies lack the know how to clone dinosaurs as yet, so all but one of their seven team members are humans from various countries. The team includes Jack Hardgrave, The Leader known to punch Tyrannosaurs to death, Joe Spencer, a quick soldier who can call in an artillery strike, Nigel Blythe, a british soldier who can use the rocket launcher or the flamethrower, which are excellent for fighting tanky dinosaurs and hard to hit dinosaurs, respectively, Ilona Vike, a latvian sniper who can bait velociraptors with a jackrabbit distraction, leaving them immobile and vulnerable for a few seconds, Camille Brun, a french medic with an SMG, and Jakob Brown, a jewish german defector who uses a heavy machine gun and powerful but inaccurate flechette gun in combat. Trigger is the sole allied dinosaur, a small Protoceratops rejected by the Germans for a leg deformity. The Allies found him and fitted him with a prosthetic and a mounted machine gun, granting the allies a powerful new ally. Guess that insistence on "perfection" didn't work out so well for the Nazis.