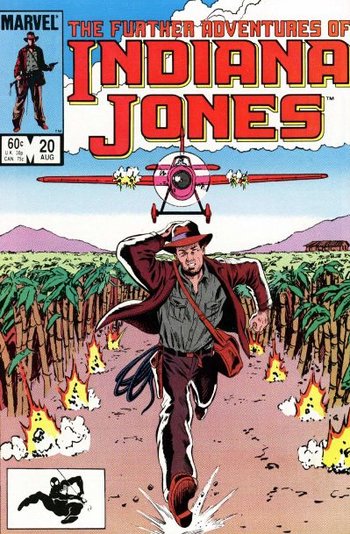 Strafing is the act of attacking surface targets from the air with something other than bombs, guided missiles or a long, continuous energy blast. One might think that a bullet fired from an aircraft at a target on the ground, if it misses (which would likely be the case, unless the pilot was a good shot, the target was rather large, etc.), would likely strike the ground well beyond the target.

In Real Life, it's not so simple, as the type of target, the aircraft type, the pilot's experience, and nearby defenses or other targets (such as civilians) in the area, can all come into play. And if the aircraft is fast enough you won't even realize it's attacking until it's done and gone.

In Hollywood, it does not work that way. The Rule of Cool and the Rule of Drama dictate a more theatrical methodology:

Historically movies portrayed strafing unrealistically because it was safe and easy. Set off a couple of lines of small charges in the sand running toward the target, far enough apart to not endanger the stunt crew, and the audience cannot fail to get the point. It's simple, cheap, straightforward, and the inexorably approaching danger significantly raises the dramatic tension. Also, some of this is Truth in Television, as 'walking' shots up to the target helps to ensure you actually get a hit, though in reality (as seen in the Real Life Examples below) the strike pattern is usually less a steady progression than a cloud of "shorts" and "overs"—firing from an inherently unstable platform means aircraft guns aren't particularly steady or accurate.

Showing the path of devastation wrought by the likes of the P-47D's eight .50 cal machine guns would be much more difficult, expensive, dangerous and confusing, and the likely results would not be suitable for most audiences. The guns were individually aimed at a single point of intersection a certain distance in front of the plane (think about it - if the guns weren't turned slightly inward so that the shots converged, planes would have trouble with air combat as they'd end up missing targets to both the left and right at the same time). They were also far too powerful to waste on a single individual. These planes were said to be capable of sawing fully grown trees in half on a strafing run. Pilots described train cars being pushed over and horses being thrown 30 feet by the sheer kinetic impact. Not that a pilot would be likely to see a single person on the ground in any case. Without spotters on the ground in radio contact, pilots would strafe vehicles, roads, trains, or large obvious targets.

One last thing: if the strafers are Eeeeeevil, the probability of one of the strafees being an adorable little tyke who drops a teddy bear approaches 100%.

Subtrope of Near Misses, Sister Trope to Hollywood Tactics. Compare Buzzing the Deck.