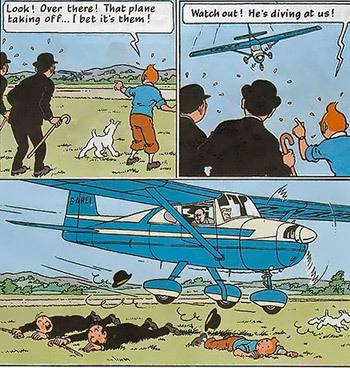 Maverick: Tower, this is Ghost Rider, requesting a flyby.
Air Controller: Negative, Ghost Rider, the pattern is full.
Goose: No, no, Mav, this is not a good idea.
Maverick: Sorry, Goose, but it's time to buzz the tower.
— Top Gun
Advertisement:

Also known as a "buzz job," this is when a pilot, or someone who can fly somehow, makes a fast pass very low to the ground or close to a target with the intent to startle or frighten, or in some cases commence a strafing run. This is generally very dangerous; planes are meant to be in the sky, where pilots have room to take action if something should go wrong. Low altitude means there is less time to do something in the event of emergency, and in this case the ground is at times less than a second away. Also, the lower you are, the more likely there are to be obstacles sticking up from the ground at which point a Belly-Scraping Flight (at best) or crash becomes more likely. So while this can be Truth in Television, Buzzing The Deck in Real Life (presuming you don't crash) will likely get you Reassigned to Antarctica.

There are usually a couple of reasons why someone would do this:

The effects on the ground are dramatic. Planes are loud, and one flying right overhead is enough to make most people jump, and perhaps duck. When traveling at speed, they can be on top of you before you hear them coming. Add to that the dread of having what's subconsciously interpreted as a gigantic projectile coming your way, and you get the idea.

A pilot can also do this in flight to another aircraft by flying very close past it (this is dangerous not only for the above reasons, but because the backwash from the accelerated air can disrupt the other plane's engines, potentially causing a crash).

Compare Wronski Feint, which is an even riskier move to get an enemy to fly into the ground or other obstacle, and Standard Hollywood Strafing Procedure for when a low pass is to attack a target on the ground.

Not to be confused with a Traumatic Haircut, which is sometimes called a "buzz cut" (or "buzz job").