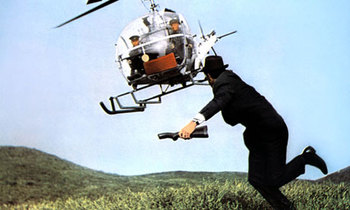 Even in the middle of nowhere, an enemy chopper will find you!
Advertisement:

Having a helicopter turn up when needed. For the bad guys to help them slip in when the good guys don't expect it, or escape just when the capture seems certain. Doesn't matter if it's a bank robbery, drug deal, or kidnapping, the helicopter will come swooping over the rooftops to help the bad guys take care of business.

On the flip side, the good guys can also have a helicopter handy when they need one, and we can count on a shot of them rushing into a waiting helicopter, with the engine powering up and the helicopter taking off as soon as the last person is inside, buckling up be damned.

This trope is so common that one might be forgiven, after watching enough movies, to think that a huge metropolis like Los Angeles or New York has a giant swarm of helicopters circling the city, waiting for their turn in whatever adventure is underway.

A sub-trope in the Vehicle Index. Can lead to Surprise Vehicle, and is a sister trope to Convenient Escape Boat. Can also involve a Short-Lived Aerial Escape, when the helicopter quickly gets shot down or disabled.

From a film-making standpoint, this makes perfect sense as it doesn't require much suspension of disbelief at all to think that the bad guys would have access to a helicopter, especially if it's the Big Bad. For the good guys, it's even easier if they're members of a police force, a government agency or the military, a foreign government, are wealthy enough to easily afford it, etc.

A helicopter that can easily land and take off is also more practical and versatile for film-making purposes than an airplane that requires a runway.

In Real Life all helicopters, even privately owned ones, are usually hangared at airports, must file a flight plan and contact local Air Traffic Control before taking off, and are clearly marked with identifying numbers. Any aircraft appearing on radar that is unidentified is going to get immediate attention from both state and federal authorities. God help you if you're anywhere near a military base or restricted airspace. After 9/11 the US military is going to shut that down very quickly.