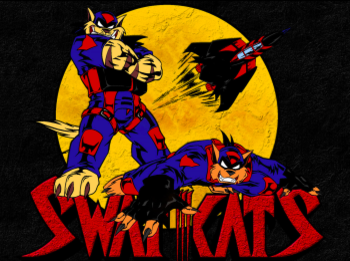 That's right, they are that badass.
"Let's kick some tail!"
"Bingo!"
Advertisement:

SWAT Kats: The Radical Squadron (or simply SWAT Kats) was one of the darkest and edgiest animated shows to come out of Hanna-Barbera at the peak of The Renaissance Age of Animation.

The cartoon was created by Christian and Yvon Tremblay, two brothers from Montreal. It ran on TBS and in syndication from 1993 to 1995, alongside 2 Stupid Dogs, and it also occasionally airs on Cartoon Network's sister network Boomerang. There were a total of 23 original episodes over two seasons, with one special Clip Show episode capping the series off. The story takes place in "Megakat City", which is inhabited by Anthromorphic Kats, and chronicles the adventures of two Badass Normal Superhero best friends who fight super-crime under secret identities.

Chance "T-Bone" Furlong and Jake "Razor" Clawson were once two humble officers of the Enforcers, teaming up as the pilot and Radar Intercept Officer of a fighter jet in the Enforcers' Air Force Squadron. Until they accidentally destroyed their command headquarters and caused sizeable amounts of damage while in pursuit of a criminal. Their former superior, Commander Ulysses Feral, stuck them in long-term community service in a military junkyard until Chance and Jake managed to pay off their debt... which, considering their salaries, was likely to be never (also, never mind that the incident was Feral's fault in the first place).

Working at the salvage yard, Jake and Chance realize that people — including the Enforcers — throw a lot of perfectly useable stuff away. Using their mechanic skills, they put discarded military equipment and weapons to their own personal use, building a high-tech fighter-jet named the TurboKat (which bears a striking resemblance to the U.S. Navy F-14 Tomcat, except with three engines and VTOL capabilities). This way, they get back in the air and fight the numerous villains that are plaguing the city. Complete with new uniforms, masks, cool gadgets, codenames, an Elaborate Underground Base, and occasional help from allies (like Deputy Mayor Callie Briggs and Feral's niece Felina), they kick super-villain tail and generally do it with style.

The Rogues Gallery includes, but is not limited to: the criminal mastermind Dark Kat, the undead sorcerer Pastmaster, mutated sociopathic Kat-turned-snake Doctor Viper, and married robotic gangsters Mac and Molly Mange (better known as the Metallikats).

Episodes of the show followed a one-shot format, featuring completely self-contained stories and certain overarching themes and villains. The Status Quo, however, does change every now and then, and only very few of the bad guys get Joker Immunity. On occasion, if the bad guy pushes them too far, our heroes will shoot to kill.

The series' attempts at bigger action came too soon for many people, and the series took criticism for its violent content. Despite a successful first season resulting in a huge Animation Bump with a Darker and Edgier visual style (sometimes accompanied by an inconsistent Animesque Art Shift, depending on who animated which episode), the show was cancelled close to the end of its second season with the final three episodes left unfinished. The show has a very strong cult following that continues to this day, and DVDs are available from the Warner Archive program.

Although the series was short-lived, it got an official game on the SNES in August 1995.

On July 23, 2015, the Tremblays began a Kickstarter campaign

to help fund a Sequel Series called SWAT Kats: Revolution. Their initial goal was $50,000. When the campaign ended a month later, they'd collected $141,500 in pledges from 2,014 backers, which meant that we should've seen at least a two-minute teaser (among other materials) for the new show. In 2022, after nearly five years of Development Hell, the series reboot has been picked up by India-based Toonz Media Group. Ironically, India is one of the countries with the biggest fanbase for the show.