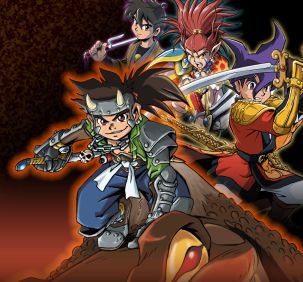 This is NOT your typical Jidaigeki you're going to find here.
"It's time for the Japanese creators to enter the world-wide stage. This is a great new challenge which offers an entirely new perspective in the development of the fantasy world. Movie is dead, and we will enjoy a new form of drama through the computers in our homes. I feel 'KABUKI' brings a whole new dimension to RPG not present in the western RPG. I hope 'KABUKI' will strike Hollywood and Disney with this oriental magic."
—P.H. Chada, Gratuitous English note in the manual of Fuun Kabuki-Den
Advertisement:

Tengai Makyou (also known with the English subtitle Far East of Eden, albeit the literal translation of the Japanese title is The Devil's World Far From Heaven) is a trilogy (and spin-offs) of Japanese RPGs (and many other media) released by Hudson Soft and the Red Company and created by Ouji Hiroi (aka Hiroshi Adachi aka P.H Chada, who was also the creator of the Sakura Wars franchise) since 1989.

While each game has it's own plot, the whole story of the original trilogy deals with the feats of the Fire Clan and their allies against the forces of evil who try to rule or destroy the land of Jipang, the Fantasy Counterpart Culture of Feudal Japan. Despite this, many of the heroes and villains aren't exactly too serious (excluding the Big Bads, albeit that depends of the game). All of this is told from the (exaggerated) point of view of a 19th-century American sociologist/historian named P.H. Chada (who is just another pseudonym for Ouji Hiroi, the creator of the franchise)

Not to be confused (at least the English title) with Eden of the East.