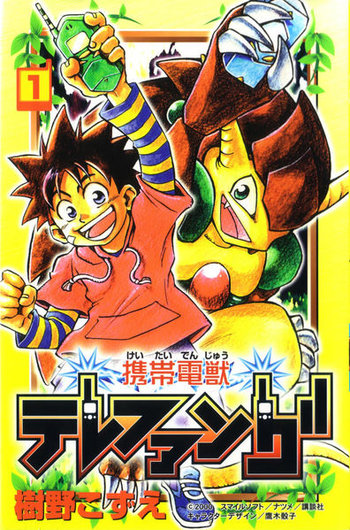 Telefang a.k.a. "Keitai Denjuu Telefang" or "Mobile Phone Monster Telefang" is a series of monster-battling RPGs vaguely in the mold of Pokémon. Perhaps one of the most distinguishing feature of Telefang is that monsters are contacted via the "D-Shot", something like a cell phone, in order to enter battle. The series count with 2 games (the first one for the Game Boy Color, the second one for the Game Boy Advance) and two manga series.

In the same fashion as Pokémon, two versions of each game were released, "Power Version" and "Speed Version". These games were created by Natsume and Smilesoft, which became Rocket Company

Since the games were never exported outside Japan, these games - specifically, the Game Boy Color versions - are perhaps best known among English-speaking gamers as the real deal behind the memetically-famous bootlegs "Pokémon Diamond"* not related to the official original Pokémon Diamond game and "Pokémon Jade". With a horrible (and very often inconsistent) translation and plagued with glitches, it's hard to decide whether or not those bootlegs actually damaged the Telefang series, since they made the series look like a cheap copy of Pokémon, but they also helped it to get widely known due to the memetic mutation. Whatever the case, the series could have been a serious competitor to the Pokémon franchise if it had been been exported.

While there is no official English version of either games, some fans are currently working on a translation patch. It can be found here

. A still active English-speaking forum based on the series can be found here

The plot is as follows: Shigeki and his friends are playing baseball, when he loses the ball. He goes to get it back at the Antenna Tree, finding a strange man investigating it. He receives a strange call from the Denjuu's world, and falls in the tree after an earthquake, ending up in a strange world of monsters, politicians bribing Denjuu with curry, and a plot to destroy the Antenna Trees...

Not to be confused with Tele-Frag, which is when things get messy when you teleport to an area where somebody is already on.