Party in My Pocket 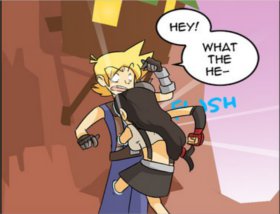 "It's a well-known fact that groups look like a distorted version of the most important person from farther away."
— Diane, RPG World
Advertisement:

In your typical console Role-Playing Game, the player is usually in control of around half-a-dozen characters (at least) for a good portion of the game. However, when walking around the world map, in a city, or in a dungeon, usually all that is seen is the main character, even when the rest of the party is supposed to be with him at the time.

Perhaps he's carrying them in his pockets.

Some games allow you to choose which party member, sometimes referred to as the active character, to be visible. In many games, this character may use certain skills when they're active, or will alter the dialogue of certain NPCs when talking to them.

If The Lancer, White Magician Girl or other party members are ever needed, either the screen will fade out, then back in with the necessary person(s) now standing alongside the Hero, or in some cases, they will simply walk out of the Hero's body, do or say what they need to, then walk back in.

Some games avert this to a degree by never showing multiple party members on the world map, such as early Ultima games, leaving only the question of where your other party members are hiding.

Goes in and out of Acceptable Breaks from Reality. Developers in the old days found it challenging to work out animations and pathfinding for multiple party members outside of scripted scenes, or apart from enemy encounters that cut away to a separate turn-based battle mode. In these games, multiple party members clumping around the player could block their view of the environment and become problematic to represent in tight spaces. All in a Row is one way to make controlling a visible party simple, but having all the important characters follow you in a neat line like ducklings can look kind of silly, and create issues such as party members getting stuck in a wall, accidentally setting off traps, or triggering a fight with a Roaming Enemy (or at least forcing them to be conspicuously intangible so they won't). It can even render a puzzle Unintentionally Unwinnable if one of your party members stands in the way of something and there’s no way to clip through them or command them to move. It’s a lot simpler if everyone just disappears into the player's body until they’re needed.

Compare with Actually Four Mooks, which is when a Preexisting Encounter does this. Related to Hammerspace Hideaway.

The Trope Namer is Monster in My Pocket and no, it is not an innuendo, that's Raging Stiffie.