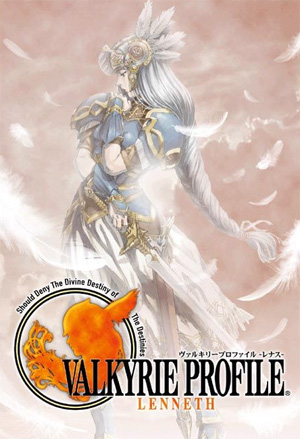 To my side, my noble einherjar!
"It shall be engraved upon your soul!"
Advertisement:

Ragnarok (the prophesied battle of gods that heralds The End of the World as We Know It) is approaching, and the god Odin requires a number of great soldiers to fight at his side. He assigns this divine task to Lenneth, one of his most loyal Valkyrie servants, who must descend to the mortal realm and sift through the souls of the recently-deceased. Once she has found a suitably pure-hearted soul, she must train it for battle and then send her new warrior to the armies of Valhalla.

However, unknown to Lenneth, there is more to her task than meets the eye: a number of sinister conspiracies are unfolding on both realms as the divine and the mortal manipulate events to achieve their own ends, and Lenneth must decide just who to trust and who to obey.

It was unique in that it had a turn-based battle system that relied on timing attacks well to increase combo hits and thus increase damage. Like other games developed by tri-Ace (like Star Ocean and Radiata Stories), it featured extensive voice acting, which resulted in several classic quotes amongst dedicated role-players.

In 2016, Square Enix announced a new entry to the series entitled Valkyrie Anatomia: The Origin for iOS and Android devices. It serves as a prequel (for real this time, it seems like) and features a younger-looking Lenneth with a redesigned outfit. It was eventually given a worldwide release in 2019, courtesy of Wonder Planet.

In 2022, Square Enix announced that the Valkyrie series would return to consoles for the first time in 16 years with Action RPG Valkyrie Elysium for the PlayStation 4, PlayStation 5, and PC via Steam, to be released later that same year.

There is a character sheet for the entire franchise, it contains tropes applying specifically to each individual character.

Not to be confused with Valkyria Chronicles.