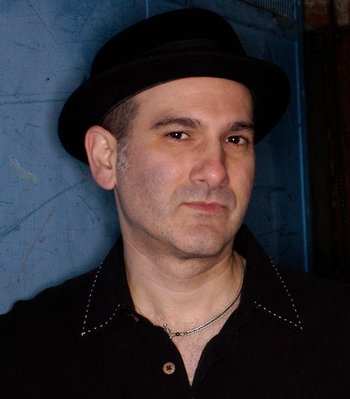 HE IS A FLAMING MOLTRES!
Advertisement:

Eric Stuart (born October 18, 1967 in Brooklyn, New York) is an American voice actor. He has done anime roles mainly under 4Kids, most notably Brock, James, and Kaiba. His most favorite anime roles are that of James and Gourry. Many people consider him to be the rival of Dan Green, but in truth, they are very good friends.

Stuart is also an accomplished singer. He formed his first band at age 14, learned to play the guitar in eighth grade, and was writing and recording songs by the tenth grade. Before graduating high school, he had recorded over 40 original songs!

He retired from voice acting to work on new material for his band. However, he reprised his role as Gourry in Slayers Revolution-R in 2010, and started making more frequent guest appearances at anime conventions in 2011. He also reprised his role of Seto Kaiba in 2017 for Yu-Gi-Oh! The Dark Side of Dimensions.

Despite doing a lot of voice work for 4Kids, he doesn't seem to be particularly fond of the company if this video

is any indication. This is because he was getting paid more for commercial voiceover work than dubbing episodes for 4Kids (he was paid about $75 for dubbing a single episode of Pokémon: The Series), and when they decided to use voice clips for commercials, he wasn't getting paid for that anymore

. He also admitted how terrible 4Kids' adaptation of One Piece was.

He started his own production called Crossing the G.O.D.S. and has done so alongside Dan Green as well as Anthony Salerno, fellow former 4Kids and generally New York based dub alumni, an audio-visual novel of sorts. It will be released in segments beginning in early 2018:Crossing The G.O.D.S. Trailer