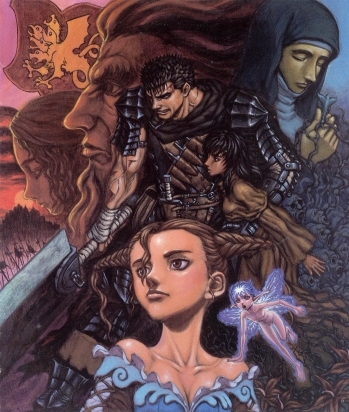 The cast. Top row left to right: Annette, Balzac, Guts, Casca, Eriza; Bottom row, Rita, Puck.
"An outcast warrior enters a land plagued by an evil fate. He is not like ordinary men, for he carries the Dragon Slayer—a mighty blade of retribution, whose fury knows no equal. His enemies will know true fear, once he starts to swing."
—Opening Narration
Advertisement:

Berserk Millennium Falcon Arc: Chapter of the Flowers of Oblivion is the first of two licensed videogames by Japanese game developer Yuke's based on Kentaro Miura's Dark Fantasy manga Berserk. Combining Hack and Slash game play with a strong story emphasis, it came out on the Sega Dreamcast in 1999 and received an English localization from Eidos Interactive in 2000 under the title ''Sword of the Berserk: Guts' Rage''. It uses an original scenario and characters created by Miura, and serves as an Interquel taking place between volumes 22 and 23 of the manga. Its 2004 PS2 sequel, Berserk: Millennium Falcon Hen Seima Senki no Shō, was less fortunate in terms of localization and did not get an overseas release.

WARNING: This works page contains Late Arrival Spoilers for the Berserk series if you haven't read up to volume 22 of the manga. Read it at your own risk!

In this storyline, Guts, Casca, and Puck come across a travelling performer by the name of Rita and rescue her theater troupe from some bandits. Upon stopping in a nearby castle town to rest, they discover that the town is afflicted with a strange disease that turns the victims into plant-like creatures called "Mandragorans" that become violent when attacked. Balzac, the lord who rules the city, tells Guts about the disease and how he is developing a cure for it, which may also cure Casca of her insanity. He gives Guts a proposal: bring him the heart of the great tree that grows in the infested village, and he will give Casca the cure. Taking the chance that his beloved might be well again, Guts takes Balzac's offer and begins the dangerous quest. Things grow more complicated when the townspeople begin revolting against Balzac's rule, and the chaos attracts the attention of the demonic Apostle Nosferatu Zodd. What waits for Guts in the village, and what is Balzac hiding from him?

Take care not to confuse this work with Fist of the North Star: Ken's Rage (although Berserk has its own Musou game in the form of Berserk and the Band of the Hawk).