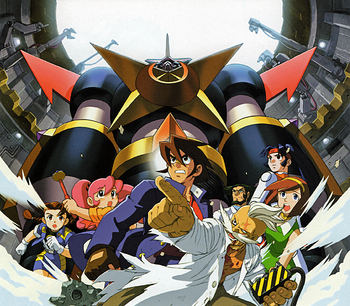 Tech Romancer, or Super Steel War Chronicle Kikaioh, is a 1998 Fighting Game that involves Humongous Mecha of various sorts. The game was produced by Capcom and the mecha were designed by Studio Nue. It its considered by many in being a Spiritual Successor to Cyber Bots: an earlier 1994 mecha fighting game that was also made by Capcom. Available from within the arcade machines and the Sega Dreamcast, the selection of fighters allow players to answer burning questions such as who would win in a fight between Mazinger Z and Ultraman, and the battle between a robot from Macross and a Gundam.

The story of Tech Romancer generally (each character's story mode is a little, or sometimes extremely different) deals with an intergalactic threat at the hands of Goldibus: a merciless Galactic Conqueror who has come to Earth in order to invade it with his loyal followers, conquer it, and enslave the human race with an emotionless iron fist. An unlikely group of heroes band together and join forces to fight against the threat of Goldibus, using their own unique mecha robots and all of them won't rest until Goldibus is defeated and the world is safe from the imminent danger.

Like most of Capcom's lesser-known fighting games (Star Gladiator, Rival Schools, Power Stone), Tech Romancer didn't make much of an impact from within its debut and that it had soon faded into obscurity, though throughout the later years, its characters have made cameo appearances from within later Capcom titles.

Has nothing to do with literal romance with technology, unless it's one of Rafaga/Simon's endings.