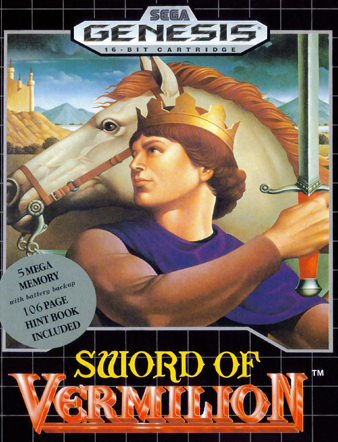 Sword of Vermilion is a Role-Playing Game, made for the Sega Genesis by Sega's AM2 team in 1989. It was part of the Sega Genesis Collection for the PlayStation 2 and is also available as a download for the Wii.
Advertisement:

Eighteen years ago, the evil king Tsarkon from Cartahena defeated king Erik from Excalabria. As his castle collapsed around him, Erik bade his most trusted servant Blade to flee from the castle with Erik's infant son. Blade did so and raised the infant as his own in a remote village.

In the present day, the player takes on the role of Erik's son, now a grown adult. On his death bed, Blade tells him the truth and tasks the player to go on a quest to Set Right What Once Went Wrong.

This game has nothing to do with Laevateinn, the sword wielded by Stella Vermillion.