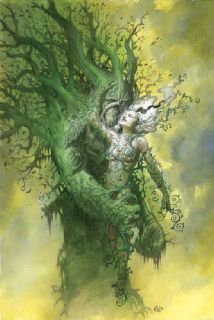 The Swamp Thing and his wife, Abigail Arcane Holland.
Advertisement:

The Plant Person is a bridge between the Plant and Animal Kingdoms, being able to talk to plants (or at least understand them at an empathic level) and people alike. Their wisdom can be profound and alien, coming as it does from a plant rather than animal (let alone human) point of view. Biologically, they are either a motile plant or a person with a lot of plant-like characteristics: they may be able to photosynthesize their own food, drink water from their feet, and even regrow severed limbs. If they lean more towards the animal, they probably still need to eat (which they logically would, as photosynthesis in real life doesn't provide enough energy for a motile lifestyle), but it may be "nutrients" or dirt rather than cheeseburgers (though they just might; hey, at least it isn't people).

They can usually claim without irony that they are "one with nature", living in forests and surrounded by life. They might be a mystical Dryad, a scientist who fell into a vat of chemicals (or a mystical plant god who thinks he did), or a race of motile plants that just happens to look very human by accident, by design, or by design. Despite generally having a human shape, they may or may not be able to casually pass for human. This is because they tend to have green or barky skin, leaves for hair and dress in Garden Garments and/or plant-themed Clothing Appendages. Interestingly, there is a big disparity between male and female plant people, as the page image shows. Perhaps stemming from the classical Dryad, plant people tend to be women, and very attractive ones at that. Men, on the other hand, take more after trees than humans.

In a story, they are usually a Nature Hero, or at least have great value in nature. They may also be a hermit or sage that advises the heroes. In extremes, they may be a Knight Templar of an eco terrorist... that can call killer trees on a whim and snare you in vines, all while making their Enchanted Forest inescapable.

Expect them to have Fertile Feet, and feel the effects of deprivation when removed from natural environments for long. They usually function as a Fisher King in whatever area they inhabit; poisoning them or the forest has a reciprocal effect.

This trope has a number of subtypes relating to specific types and uses of plant-based intelligent creatures in media. To wit:

See also Green Thumb, When Trees Attack, Man-Eating Plant, and Nature Spirit. For plant-animal hybrids see Planimal. Contrast Beast Man. Also, when Rule 34 is invoked, expect the being to be called an "Alraune".