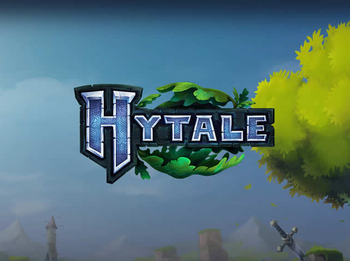 "It'll be ready when it's ready."
Hytale

is an upcoming block-based sandbox game developed by Hypixel Studios. The game takes heavy inspiration from the mega-hit and fellow block-based sandbox game Minecraft, but also sets out to improve upon its features while keeping the elements that made it popular. It has three important pillars: the Adventure mode, minigames, and creative tools.
Advertisement:

The Adventure mode, which is playable alone or in co-op, places you in a randomly-generated fantasy world, but despite that, Hytale's world has a predefined history and its own races. It combines the kind of gameplay which is standard for sandbox games of this style with deep RPG elements. There are also handmade quests to tackle, as well as boss encounters that'll take more than a powerful weapon and a good set of armor to conquer. Of course, you still have the ability to build a house, make a living, and put off the world-saving until later.

Minigames are quite a familiar aspect for Hypixel Studios, as they've been making them for years (more on that later). They've not only brought back their old ones, but created brand new games for you to enjoy and, of course, you can also make your own. Speaking of making your own things, Hytale has a large focus on player creativity, and not just the block-placing kind. There's a large slate of modding tools (which were used to make the game), including an all-in-one modelling, texturing, and animation tool that lets you make your own assets, named the Hytale Model Maker. Every aspect of the game can be modded, down to damage values. There are cinematic tools that allow for machinima creation using game models. In-game scripting also exists, which lets you create or change scripts and see the results live. All of these pillars can be combined with player-made community servers in order to form them into whatever you want.

The name "Hypixel" will sound familiar to fans of Minecraft, as Hypixel, Inc. is responsible for creating the game's most popular server and its many minigames (some are listed here), but eventually, the modders responsible for said minigames began hitting Minecraft's limits and were continually forced to find workarounds. With a desire to become full-on game developers, 40+ members split off to form their own team and started making Hytale in 2015; their creativity was now unhindered and allowed to roam free. Hypixel Studios was officially established in 2018 with the financial aid of Riot Games (yes, that Riot Games) and a group of game development veterans and experts in the industry, and the money also allowed them to bump up their production values.

The game was originally due for 2021, but after some shifts in the way the game is developed, it was delayed to "2023 at the earliest".