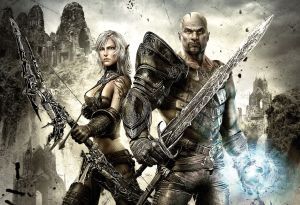 Hunted: The Demon's Forge is a Fantasy Hack and Slash game released in 2011 for the PS3, Xbox 360 and PC by Bethesda Softworks and inXile Entertainment. Primarily designed for co-op play, the players are cast into the roles of the elven archer E'lara and the human warrior Caddoc. The game chronicles the pair's mercenary adventures as they search for gold and whatever else they can make off with while working for a woman named Seraphine who promises them power as well as wealth if they will help her with a simple favor.