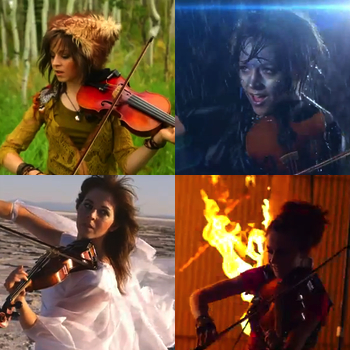 "I even had this red carpet imported from the Fire Nation! You know, they make the best red stuff over there!"
— Varrick, The Legend of Korra
Advertisement:

A common trope in works that make use of Elements of Nature — especially in video games that feature Elemental Powers — is that every element will have a color associated with it. This way, you know that anything red is related to fire, blue to water, etc.

This can manifest in many ways. Some common ones are enemies and weapons being the color of their element, element-resistant armor having that element's color, and elemental spells being color-coded in menus.

A few common examples of this trope follow. There are occasions where other colors are used for these elements, and these are by no means the only elements that get color-coded.

A Super-Trope to Elemental Hair Colors and Elemental Eye Colors. A Sub-Trope of Colour-Coded for Your Convenience. A Sister Trope to Color-Coded Wizardry (the wizards themselves being color coded).