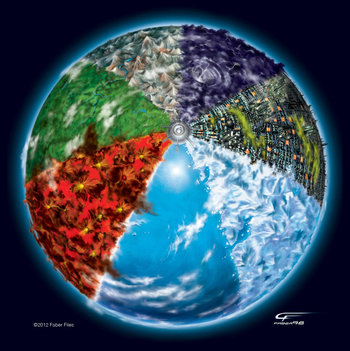 Slizer, also known as Throwbots in the United States, was a line of LEGO Technic toys, sold between 1999 and 2000. Despite how short-lived it was, the line proved to be surprisingly influential, since its new building system, consisting of ball joints and sockets, would be reused famously in its successor, BIONICLE, and on a grander scale in Hero Factory. Also, it gathered something of a fan following, because of how cool the whole theme was.

While not nearly as complex as that of BIONICLE, or even Hero Factory, it did have a story, told through different media such as set catalogs and promotional comics, though it was often contradictory and infamously unfinished due to Cancellation. What more, Europe and the US detailed two completely different stories and settings, a patchwork planet setting and several single biome planets respectively. Nevertheless, the former version seems to be the more "official" one.

What little story material we have tells us that on the Slizer Planet, divided into seven regions and an arena, lived a group of colorful Mechanical Lifeforms, the Slizers.

They fought weird-looking wildlife and each other with energy discs and Elemental Powers, and competed in an arena located at the planet's North Pole. Initially, there were eight Slizers, all of them ruling over their own portion of the planet (except Jet/Judge, who ruled over the Slizer Dome at the North Pole). Some sources mention that 4 were good and 4 the other 4 were evil, but other sources suggest that it was more of a free-for-all.

Then, on December 31, a meteorite struck the planet, destroying half of its mass in an Earth-Shattering Kaboom. Only half of the Slizers survived (Torch, Ski, Scuba and Turbo), but the meteor also gave rise to several new, "mutant" Slizers:

However, just before the meteorite struck, a mysterious, ancient warrior called Millennia/Millennium appeared out of nowhere. He challenged Blaster to a fight that would be called "Battle of the Big Bots", the ultimate clash that would decide over the fate of the planet...

Then, the line ended. A similar theme, RoboRiders followed, although it didn't turn out to be quite successful, and never received the recognition its predecessor got.

LEGO's finishing lines still echo inside the minds of its followers: Yes, the Slizers/Throwbots had gone. We have seen the last of them. But one day, when the LEGO world is in great danger, the sound of throwing discs will be heard once again as the Slizers/Throwbots awaken and battle the enemy. Well, the disk piece did get to be re-used later in BIONICLE...