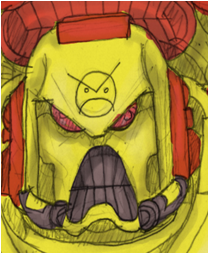 ALWAYS ANGRY! ALL THE TIME!!!
Advertisement:

Faceless Goons are already pretty scary, but some villains just want more. But the faces under the helmets aren't particularly fearsome, and Spikes of Villainy just don't cut it. Something to suggest the pain these guys are gonna bring...

This is when a helmet's visor is embossed with a furious face or something similarly frightening. Merely having scary-looking eye-slits doesn't count, although features that just vaguely suggest a wrathful expression might. Stern looks also count, and might even be scarier than the raging ones. Don't be surprised if this is part of the Doom Troops' uniform. Mecha-Mooks might have this, depending on how their "faces" look. Compare and contrast Malevolent Masked Men (for when the scary visor is the whole point) and Expressive Mask (which actually changes expression). See also Faceless Goons and Gas Mask Mooks. A common feature of Scary Impractical Armor.