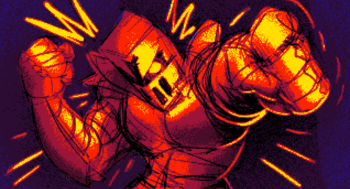 Swords are for PANSIES.
Advertisement:

FIGHT KNIGHT (yes, in all caps) is a 3D First Person dungeon Beat 'em Up, by indie game studio Team Sorcerobe. For all intents and purposes, it's Doom mixed with Punch-Out!!! and God Hand, with some hints of Dark Souls (the character was partly inspired by a fisticuffs-only Souls build). The gameplay involves exploring a grand tower while battling random encounters and bosses in a two-lane corridor while blocking and weaving around enemy attacks while delivering powerful counters. Oh, and your only form of interaction is punching.

A mysterious tower ascends from the ground across the land, appearing without warning and before long disappearing just as mysteriously, and its interior is no less mysterious, with areas taken from various completely different locations. And dangerous monsters roam its halls. Dark sorcery is afoot, no doubt. But who would be brave, powerful and skilled enough to claim the prize at the peak?

The player assumes the role of the eponymous FIGHT KNIGHT, a crowd-favorite of the gladiatorial circuit and master of arms. However, he has been away from the arena for some time, pursuing the tower for some unknown reason. And on top of that, despite being a known weapons-master, he refuses to touch his many armaments, instead utilizing just his fists - in fact, it seems weapons outright shatter in his hands, possibly due to a curse. Fortunately, that is not a problem, for FIGHT KNIGHT's fists are satisfactory to get the job done...

The final demo version of the game was released in 2018, and can be downloaded here

. The full version, following some delays, was released on November 30, 2021.