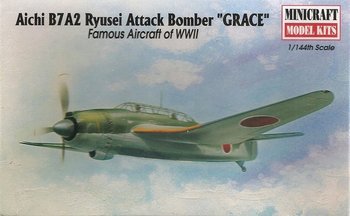 If you didn't understand that, you're probably not alone. note And if you did understand it, it probably gave you the shivers. That was an example of using Reporting Names, which are names given to military machines whose real names aren't known for some reason. For instance, if American forces keep encountering a particular type of Russian submarine, they might start referring to those submarines as "Tango" or something.

The use of reporting names goes back to the Pacific Theater in World War II, when American intelligence officers started assigning simple, easy-to-remember names to Japanese aircraft types. (See the current page image for one example.) Fighter and reconnaissance aircraft received boys' names, such as Oscar or Zeke, while bomber and transport types received girl's names, such as Betty or Judy. During the Cold War, Western reporting names were one of the main ways to refer to Soviet, Chinese and North Korean military technology, for the reasons of language differences and because the actual designations (except for most aircraft), especially in the missile field, weren't generally known. Western military technology tends to get public names, often with help from the PR department (the companies make more sales if the item has a catchy name). The Soviet and Chinese technology was (is) secret and sometimes they didn't admit it even existed, never mind the name. Of course, some super secret ("Black") projects in the USA and other nations are given "reporting names" by other nations and the press when their rumored existence is guessed at.

In many ways (especially in the West, and very especially in the U.S.), they still are a main way to refer to these technologies, especially in naval and aerospace discussion. It helps that they are easy to remember. And in an era where Russian and especially Chinese aircraft are increasingly likely to have a public name for the same reason American aircraft do,note despite being state-owned and nominally Communist, Chinese weapon-making companies are very profit-oriented when it comes to exporting their products there's still the fact that for English-speakers not all of their names are easy to pronounce.

Somewhat naturally, the idea has carried into fiction, such as the Inner Sphere-given names of Clan Omnimechs in BattleTech.

Compare Market-Based Title, which is a case of different names given by the manufacturer for use in different countries.

Do not confuse with "naming names", which was a rather different Cold War phenomenon. Also don't confuse with "Reporting Marks", which are the 1- to 4-character code used to identify rolling stock operated by a railroad or rail-stock owner in the United States.

Also, if the "proper" name of a ship/fighter/tank/missile/etc. is used by all of a work's (on-screen) factions, then don't list it here; this page is for instances where a name other than the "proper" one is commonly used by at least one faction. If there is a pattern among "proper" names, then take it to Theme Naming or the respective subtrope thereof. Conversely, if the faction that uses a piece of equipment uses a name that is significantly different from its "proper" name, then it counts and should be listed here. A case where the "proper" name is not used because it is not known by any of the viewpoint factions also counts.

Some of these names are drawn up by the Air Standardization Coordinating Committee, made up of the UK, US, Canada, Australia and New Zealand, so these are known as ASCC designations too, but this is somewhat inaccurate, as other groups chip in too. Understandably, Soviet types and NATO's believed types don't fully match up.

See From Russia with Nukes, Reds with Rockets and Russians with Rusting Rockets for more examples of Soviet/Russian reporting names. The Wikipedia entry

covers this in a lot more depth.

Here's some of the better known reporting names:

open/close all folders
Aircraft
It's worth noting there is a method to these names. They are all phonetic within (presumed) class. In simpler terms:

Additionally, for fixed-wing aircraft if the name had two syllables it was jet propelled. One syllable meant propeller driven.

Variants have a letter added after them, such as "Backfire-C" for the Tu-22M3. There can be sub-categories of these too.

By the way, that message at the top of this page means incoming Tu-22Ms armed with Kh-22 anti-shipping missilesnote Not that type, unfortunately (which could be equipped with a nuclear warhead), backed up by Su-27s.

Ships and Subs
All submarine classes are named, in random order, for a letter in the Military Alphabet (Alpha, Bravo, Charlie, etc..). When they ran out, the next class was named "Akula" ("shark" in Russian). It should be noted that the same name was actually given by the Soviets to what the West called the "Typhoon", which causes some confusion among sub spotters. The Cold War ended before more classes came out post-"Graney". The intention was to continue using fish names, but since Russia has been somewhat less secretive about the introduction of new submarines (publicly announcing the names of each new sub while it's under construction) NATO has simply used the name of the first ship as the reporting name. These are sub-divided with a Roman numeral afterwards for modified versions, such as "Delta IV" for the Delfin type of Soviet SSBN. Though in at least one case (the "Echo I" and "Echo II") the Soviets considered them to actually be separate classes; Project 659 for the former and Project 675 for the latter despite their extreme similarity.

Older works may refer to these by letters i.e. T-class for the "Tango", D-class for "Deltas" etc.

Surface ship classes have a variety of different names. A ship might go from temporary designations, to Russian words beginning with "K" (for "korabl", Russian for "warship") to "first in class" names (rendered in "italics" here), which the Soviet Union and Russia don't actually do, tending to use names of birds for their bigger ships (and in all cases using a Project number; when a name is also used for the class it's appended after the number; Project numbers are not sequential and sometimes are reused, so the bird names can also serve a disambiguation purpose). Additionally, the ship NATO thought was the first of the class isn't always the actual class leader.note For example, the Type 7U destroyer was known in the West as the Soobrazitelnyy class, but that was actually the third Type 7U built; the first was Storozhevoi. There were also "shipyard first sited" names for more minor vessels (this was standard for destroyers at the very start of the Cold War, until it occurred to NATO that the Soviets had a finite number of shipyards and this would've resulted in lots of repeat names), as well as Russian diminutives, bird names...

Fast attack craft, both torpedo boats and the succeeding missile boats, were given the Russian names of insects. Which is another potential cause of confusion because the Soviets themselves also named their boats after insects, but naturally didn't choose the same insects as NATO.

For the People's Liberation Army Navy, surface combatants are given reporting names based on locations in China, while submarines are named after historical Chinese dynasties.

Warheads, Radars, and other Ancillaries
The other way of referring to missiles (and space launchers) is by a Department of Defense letter designation i.e. SS-20. SS means surface to surface and 20 was the 20th type identified. If there's an N in the designation, it's a naval missile. X means eXperimental (i.e. in development). This system remains today, with the under-development (and not exactly working) Bulava missile (for the Borey class submarines) being the SS-NX-30.

The two designations are often combined (i.e. SS-20 "Saber"), but they are assigned separately. This sometimes means that the same "name" is allocated to more than one designation, something that usually applies with surface-to-air missiles. It should be noted that while anything new that turned up got a reporting name, only stuff thought likely to enter service got a DoD designation.

When it comes to equipment designed and produced by the Peoples Liberation Army (as opposed to imported or licensed hardware) the usual methodology is to reset the number and add a "C" too the front of one of the above designations. For example: The CSS-4 (Chinese designation Dongfeng 5), which was the first true Chinese ICBM. And the CSS-N-2 "Silkworm" (Chinese designation Hai Ying 1) is a widely-exported anti-ship cruiser missile, based heavily on the Soviet P-15 Termit (SS-N-2 "Styx").

North Korean missiles were named after the places where they were first seen (Nodong is not the actual name for the missile, being called Hwaseong or "Mars" by the DPRK); but US designations seem to have moved to a numbering system beginning with KN.

Radar, electronic, communications and sonar systems usually have two-word names, sometimes picked in an amusing reference to the shape of the system, such as:

Torpedoes form an odd exception to the usual scheme: they were designated by two numbers, the first being the diameter of the torpedo in centimeters, and the second being the year the torpedo was introduced. Hence, the 53-65 wake-homing torpedo is a 53cm wide torpedo first seen in 1965, and the 65-76 torpedo is 65cm wide and was introduced in 1976. There are a lot of 53-'s as this was a standard torpedo size for the USSR during most of the Cold War.

Other Real Life Examples
A similar system was used for Japanese aircraft during World War II. "Zeke" referred to the Mitsubishi A6M Reisen fighter more commonly known as the "Zero".note Unlike most Japanese aircraft, the A6M series had a Japanese military designation ("Type 0 Carrier Fighter", due to entering service in Imperial Year 2600 or 1940) that was known to the US military. As a result, it ended up with the well-known nickname of "Zero" (incidentally, it had the same nickname among Japanese pilots) and as a result its reporting name was rarely used. (Although when a new version, the A6M3, was issued, the Allies, unaware that it was a new iteration of the Zero, gave it initially the reporting name "Hap." However, General Henry H. "Hap" Arnold wasn't too thrilled with the name, and it was changed in extremely short order to "Hamp.") The naming scheme was a mostly simple one, with fighters being given male names (Zeke, Oscar, Rufe, George, Frank), bombers/recon planes given female names (Betty, Kate, Val, Myrt, Dinah), trainers being named after kinds of trees (Maple, Ash), and a rocket-powered kamikaze guided bomb being quite appropriately referred to as "Baka" note "Idiot" in Japanese language. In case anyone's wondering about the choice of names here, the officer who selected most of these codenames, Captain Frank T. McCoy, was from the Deep South and chose the names he was most familiar with.

open/close all folders
Anime and Manga
Comic Books
Fan Works
Literature
Star Wars Franchise
The Star Wars Expanded Universe, particularly the X-Wing Series, is unsurprisingly full of this. Really big, impressive ships, like Executor-class Star Dreadnoughts, got no nicknames, but ships that were encountered more frequently tended to attract short names that could be shouted by surprised pilots when they came out of hyperspace. Some of the more recurring names:
Tabletop Games
Video Games
Western Animation