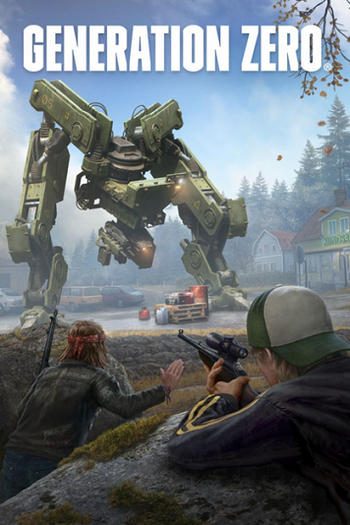 Generation Zero is an open-world First-Person Shooter designed for co-op play. It was developed by Avalanche Studios and released on PC, Playstation 4 and Xbox One on March 26th, 2019.
Advertisement:

It is set in the developers' native Sweden, in the alternate version of The '80s where Swedish military grew paranoid about the potential Russian invasion, and chose to counter it through accelerating robotics research and secretly constructing an army of robots. You (along with your friends in the co-op mode) are youths who came back from a vacation to stumble into the aftermath, when there are no more humans left, and only the killer robots roam free.

Generation Zero plays like a standard post-apocalypse game: start off empty handed, gather resources and weapons, and survive your way through endless machines. What Generation Zero has is a distinct combat system where you can break parts of your enemies, components, in order to cripple their combat capabilities. Bigger and tougher machines have more parts and disabling a handful of dangerous enemies can turn the tide the battle in your favor.

No relation to the Valiant Comics comic book; or to Mutant: Year Zero, an entirely different video game, also set in Sweden.

The game does not remember slots, so if you use all of your health kits (not hard in the early game), then you have to go through the whole sequence all over again when you find some more. There is also no Menu Time Lockout even in singleplayer/solo mode, so good luck trying to do this in combat.