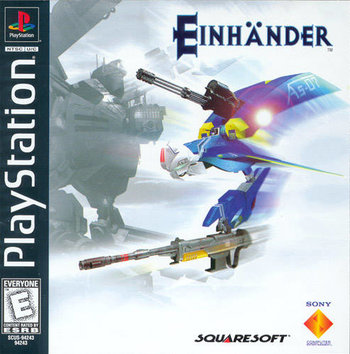 Glory with the Moon. Mercy on the Earth.
Advertisement:

A surprisingly good PlayStation 1 side-scrolling Shoot 'em Up from SquareSoft. The player takes the role of an anonymous fighter pilot sent by the moon nation Selene to fight its war against Earth's forces, raiding its only city (called Sodom in the Japanese version). Initially armed with nothing but a weak machine gun, the fighter can nevertheless grab weapons called gunpods from enemies, including plain old cannons and missile launchers as well as a lightning gun and energy sword. What follows is a single small fighter cutting a huge swath through huge installations defended by endless numbers of aircraft and turrets.

Most likely, you have heard of this game because of how dissonant the game is compared to other series made by SquareSoft, since this is a rare case of SquareSoft doing something other than the RPG genre. As a result, it became a cult classic later on due to how fun and impressive it really is.

The composer (Kenichiro Fukui) for the game would later go on to compose songs in Final Fantasy VII: Advent Children, produce the theme song for Final Fantasy XII, and play as the keyboardist in The Black Mages, so you might have heard of this style before. The soundtrack from the game combines several genres (ranging from Techno to Rock) in unique ways that would be comparable to the likes of Yuki Kajiura. The most notable song from the game is "Shudder"

(which would be the other reason you are here), which combines Fast Rap, Techno, Rock, and other genres all for the first few bosses in the game.

Surprisingly, Einhander itself appears in World of Final Fantasy as a mirage, and a monster with its name and primary gimmick appear as a boss in Final Fantasy XIV: A Realm Reborn. It also has cameos in Kingdom Hearts III as a custom Gummi ship as well as Schwarzegeist (and Monitor) being a Gummi Ship Bonus Boss.

This mid-boss from Einhander's 5th stage certainly isn't monkeying around with your destruction.

This mid-boss from Einhander's 5th stage certainly isn't monkeying around with your destruction.