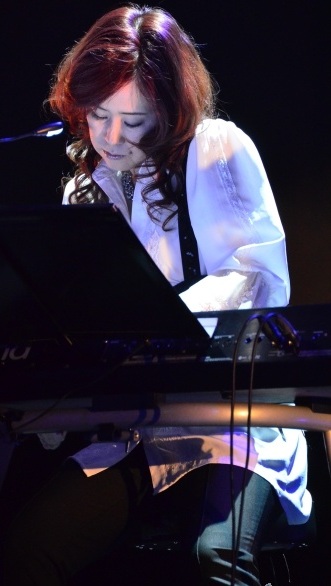 "I have a love of songs that get me out of the quotidian. I like operas. Operas are completely in their own world, aren’t they? Within the sanctuary of the opera house, they weave otherworldly spaces for four hours. I love such songs with vistas into other worlds―-songs that seem to distort the size of my rooms when I listen to them. When I make melodies in my own little way, the lyrics end up that way. Lyrics like “I bought three radishes and found them cheap～♪” aren't relevant to my interests! It goes like “A traveler searching for eternity～♪” instead."
— Yuki Kajiura
Advertisement:
"Canta Per Me"

A Genre-Busting Japanese composer, music producer, impresario, and ethnomusicologist, born in Tokyo on August 6, 1965 but raised in Bonn, Germany. After returning to Japan as a teenager, she worked as an Office Lady before quitting in 1992. She first came to musical prominence as one half of the group See-Saw with Chiaki Ishikawa in the 1990s, and established herself as a solo composer around the turn of the millennium with the seminal soundtracks to Noir and .hack and a few musicals (as well as at least some of the Japanese institution that is Sakura Wars), subsequently spending many years as the 'house composer' for Bee Train.

Widely considered second only (or equal) to Yoko Kanno as an Anime soundtrack composer, her Genre Mashup sensibilities, Reclusive Artist tendencies and generally unusual way of life, and undeniable talent have invited comparisons to such figures as Ennio Morricone and Ludwig van Beethoven—amazing compliments, considering her dilettante background and relatively late start in music for a modern artist, not devoting herself to it full-time until about the age of thirty and not reaching major success until thirty-five.

Her music ranges from Ominous Constructed Language Chanting (Madlax) to "Psycho" Strings (The Garden of Sinners) to sweet pop music (many a My-HiME Image Song) to lushly instrumented suites (Noir) to whatever her band Kalafina is supposed to be. El Cazador de la Bruja is notable for having shown Kajiura's work in ethnomusicology and the musical traditions of Latin America and the American West, evoking musicians from Daniel Alomia Robles to Johnny Cash and Frankie 'Old Leather Lungs' Laine. She was for a time an impresario for the innovative pop group ALI PROJECT, and brought them into the Noir production. All of this is held together by her adherence to a distinctive blend of classical and folk-based music theory regardless of instruments and tempo and her Romantic-influenced emphasis on melody and circumspectly psychological and spiritual lyrics.

All in all, she's generally thought of as a unique, still relatively young musician of great talent, worthy of her widely perceived status as The Rival to Yoko Kanno (although they don't seem to bear each other any ill will at all).

Yuki Kajiura is the producer of Girl Groups FictionJunction and Kalafina.

Her closest Western equivalent is Hans Zimmer, who also bears a penchant of crossing high-tech modernity with epic opera.

She's associated with the following tropes:

Yuki Kajiura may be heard in: