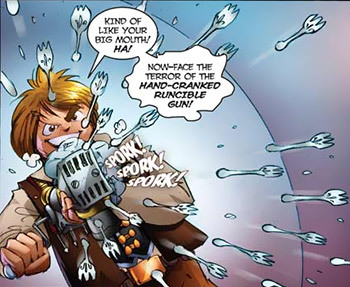 When an awesome-looking weapon isn't possible, awesome ammunition is. Abnormal Ammo covers exotic substitutions of practical ammunition, as well as ammunition that works only for the Rule of Cool. Most people don't have a weapon that shoots glasses of milk, but in fiction, there's no shortage of strange weapons with unusual discharge. All bets are off if a catapult comes into play; even in Real Life, practical ammunition like boulders and gravel were frequently replaced by low-tech biological weapons (dead/diseased animals/people) or incendiary devices (Greek Fire).

This trope is Truth in Television in that just about everything has been used as a weapon at least once. What keeps abnormal ammo from becoming normal ammo is that real versions are most often Cool, but Inefficient or Awesome, but Impractical.

May overlap with Impossibly Cool Weapon (where the weapon is exotic, not the ammo).