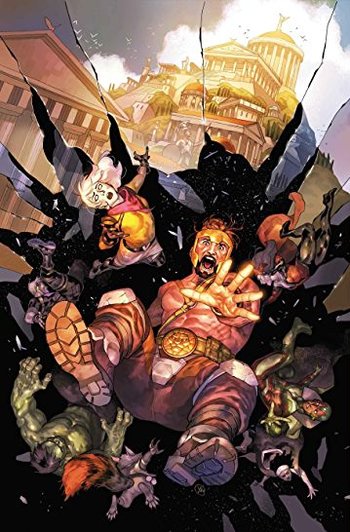 You want to see my creation? Come this way please — and I will show you everything!
— Phineas Horton, Marvel Comics #1
Advertisement:

Avengers: No Road Home is a Marvel Comics mini-series starring The Avengers. It is the sequel to the lauded Avengers: No Surrender and starring many of the heroes from that event. The series is written by the No Surrender creative team of Mark Waid, Al Ewing and Jim Zub.

Voyager, the mysterious heroine at the center of the No Surrender event, has sought to recruit a team of Avengers to deal with a terrible threat - the powerful Queen of Night is stealing the light throughout the universe. Now Hawkeye, the Immortal Hulk, Hercules, Scarlet Witch, Vision, Spectrum and newest addition Rocket Raccoon must assemble to face this threat through space and... into the Hyborian Age?!

"I am mankind's first darkness. I am midnight and moonrise. I am a primal being, greater than gods."