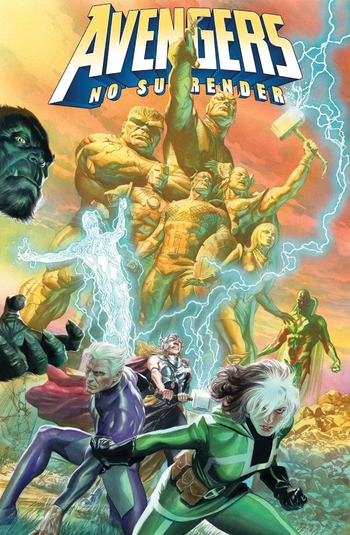 A phenomenon unlike any other...
"Avengers — you fight for mankind! You give your all and then double it! You look death in the eye and you tell it no! No retreat! NO SURRENDER!"
Advertisement:

Avengers: No Surrender is a 2018 Bat Family Crossover by Marvel Comics, published as part of their "Legacy" initiative and featuring The Avengers at its core.

Imagine waking up one morning and realizing something's totally off. Now imagine said thing that's totally off is that, somehow, the Earth is not where it's supposed to be. This is what's happening and to solve this mystery, the three Avengers teams - the main group, the American Idea Mechanics, and the Avengers Unity Squad - as well as many other former Avengers, must assemble like never before.

To complicate matters, Thanos' Black Order and the Lethal Legion are dropping in for some "fun." And in the middle of it all is a mysterious woman named Voyager, who claims to be a member of the original Avengers... but is she really?

No Surrender ran for a total of sixteen issues, unofficially leading up to the release of Avengers: Infinity War in April 2018. An interquel, Quicksilver: No Surrender, was published after the conclusion of this storyline. A weekly sequel, Avengers: No Road Home, was released in 2019, with most of the same creative team returning.

Avengers: No Surrender contains examples of the following tropes: