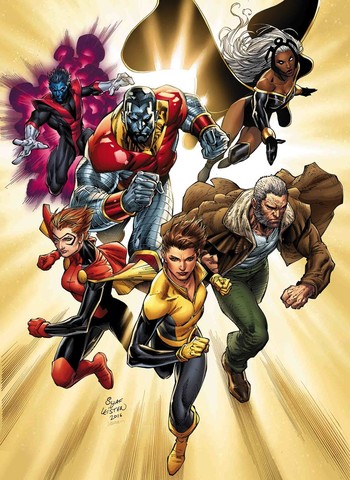 X-Men: Gold is a twice-monthly ongoing comic published by Marvel Comics, launching under the post-Inhumans vs. X-Men ResurrXion umbrella of X-Men titles. It's written by Marc Guggenheim (Arrow) and drawn by rotating artists.

After a fraught number of years for the X-Men, including near-extinction, as well as wars with both The Avengers and The Inhumans, mutantkind has reached a livable point of stability. While still hated and feared by the larger world, the X-Men find themselves in a unique position to fully take advantage of their new lease on life.

While sister title X-Men: Blue focuses on the time-displaced Original Five under Magneto's tutelage, Gold features a brand-new flagship team led by stalwart X-Man Kitty Pryde, following her brief sabbatical with the Guardians of the Galaxy. Joining her on this endeavor are Storm, Colossus, Rachel Summers (now using the codename Prestige), Old Man Logan, and Nightcrawler. Together, it's up to them to restore the legacy of the X-Men in a world that almost lost them forever.

The series ended, along with the rest of the "coloured" series, with the Extermination event.