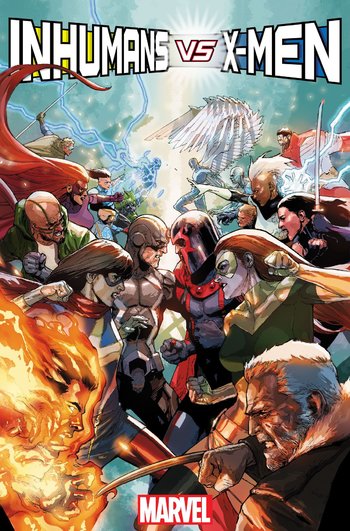 LET'S GET IT ON!!!
Advertisement:

Inhumans Vs. X-Men is a 2016 crisis crossover published by Marvel Comics, written by Charles Soule and Jeff Lemire with art by Leinil Yu. Serving as the culmination of a years-long storyline that began in 2013's Infinity, Inhumans vs. X-Men finally sees the Inhuman-Mutant tension come to a head. With the X-Men no longer able to tolerate the harmful effects of Terrigen Mist on Mutantkind, they find themselves officially at war with the Inhumans.

The Beast has discovered dreadful news: the Terrigen Mists have saturated the Earth so much that, in two weeks time, the entire planet will be uninhabitable to Mutants. Finally pushed to the brink, the X-Men will not go down without a fight. To ensure that Mutantkind lives on, they will take on the Inhumans and their royal family.

Despite being a big event, very few titles were involved with only Extraordinary X-Men, Uncanny X-Men (2016), All-New X-Men, Uncanny Inhumans and, strangely enough, Deadpool and the Mercs for Money.

IvX was followed by a mini-event called Resurr Xion, which saw the launch of seven new X-Men titles.

In addition to the new series above, All-New Wolverine continued with a soft relaunch and rebranding, while Old Man Logan got a new creative team for ResurrXion.

Inhumans Vs. X-Men provides examples of the following tropes: