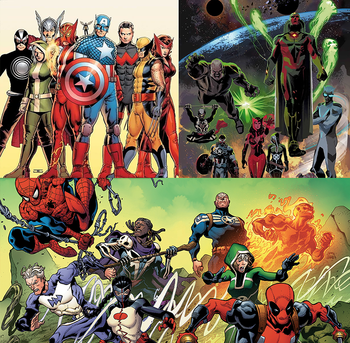 Uncanny Avengers is a Marvel Comics title, featuring a mix of characters from their biggest franchises: The Avengers, the X-Men, and (starting with volume three) The Inhumans.

Originally launched as part of the Marvel NOW! initiative in 2012, Uncanny Avengers introduced the Unity Squad, assembled by Captain America in the wake of Avengers vs. X-Men to promote teamwork between them and improve public perception of mutants.

In addition to Cap, the initial lineup included Wolverine, Thor, Havok, The Wasp, Rogue, Scarlet Witch, Wonder Man, and Sunfire. The entirety of its first volume was written by Rick Remender, with a team of rotating artists that included John Cassaday, Steve McNiven, and Daniel Acuña.

Uncanny Avengers relaunched with a second volume after twenty-five issues, following the events of AXIS. Remaining on the team were Scarlet Witch and Rogue, while new additions included the new Captain America, Quicksilver, The Vision, Sabretooth, and Doctor Voodoo. This run —also by Remender and Acuña— was much shorter than its predecessor, ending after five issues to make way for Secret Wars.

It eventually relaunched with a third volume, written by Gerry Duggan and drawn by Ryan Stegman. This iteration of the team saw the return of Steve Rogers, Rogue, Quicksilver, and Doctor Voodoo, while new additions included Spider-Man, the Human Torch, a new Inhuman called Synapse, and... Deadpool. Funded exclusively by the Merc with a Mouth, the new Unity Squad operated out of an abandoned theater in New York City, and later recruited Cable in their ranks.

After a brief run written by Jim Zub, the third volume was consolidated into a single Avengers title (along with Mark Waid's The Avengers and Al Ewing's U.S.Avengers) for the weekly "No Surrender" story arc, which includes the Unity Squad.