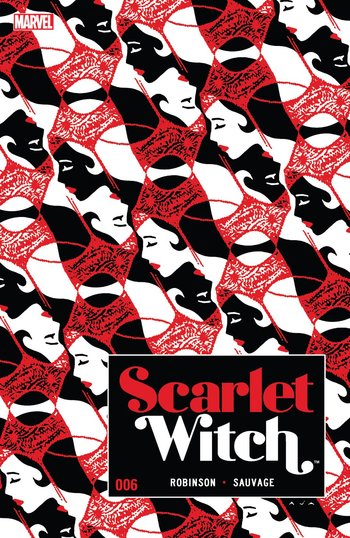 Seeing red...
"I've often heard the spells I cast referred to as chaos magic... but in actual fact they're far from "chaotic" — their power and intensity are linked to the energy of the Earth and womankind, revered by ancient pagan faiths, feared by men. Its name is witchcraft. In my past, I have ill-used that power, and I am feared because of it. But I am more than the sum of those mistakes. I am better than that. And I resolve to put things right... to right the wrongs when magic is involved. And not part of a team. Me alone."
— Wanda Maximoff, the Scarlet Witch
Advertisement:

Scarlet Witch is a 2015 Marvel Comics comic book, published as part of the All-New, All-Different Marvel initiative that followed in the wake of Secret Wars earlier that year.

Written by James Robinson with rotating artists, covers by David Aja, and a new costume design by Kevin Wada, this title focuses on Wanda Maximoff — the Scarlet Witch — as she investigates the curious case of broken witchcraft in the Marvel Universe. While she has headlined two limited series in the past — one of which she shared with The Vision and the other being a four-issue mini-series in 1994 — this is her first ongoing title as a solo character.

The past few years have weighed on Wanda quite a bit: she depowered most of the world's mutants, married Doctor Doom while suffering from memory loss, and discovered that Magneto wasn't her biological father after all — thusly meaning she wasn't a mutant, either. Oh, and longtime lover The Vision purged his memories and left her for a new family. Deciding she needs some time for herself, a tour of do-gooding witchcraft was probably in order eventually...

While not exactly an anthology comic, every issue is said to be self-contained story that fits within the larger narrative of Wanda taking it upon herself to fix witchcraft in the world, each drawn by a different artist. Some of Robinson's confirmed collaborators include Steve Dillon, Annie Wu, Javier Pulido, and Marguerite Sauvage.