Bigot with a Crush 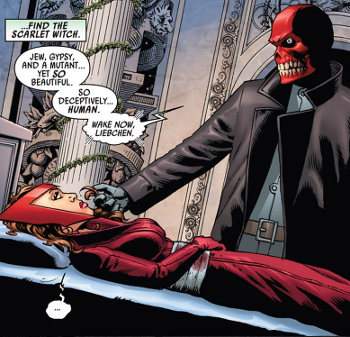 The words that can make any girl's heart flutter: "so deceptively human."
"I hate you because you're a QUEER and a FAG and... kind of attractive..."
— Bobcat Goldthwait discussing "Gay-bashing"
Advertisement:

So you have a villain of the prejudiced variety. They have some kind of racism, whether fantastical or otherwise. They want privileges, they want segregation, and maybe even genocide. So it stands to reason they couldn't possibly have romantic or sexual desire for a member of the group they hate, right?

Maybe not. Despite all odds, whether it's the target's attitude, spirit, or just appearance, a character with this trope can't help but become fixated on them, often with disastrous results. Often leads to cognitive dissonance or Doublethink for the bigot trying to reconcile their beliefs with their romantic or sexual interest, or otherwise attempt to rationalize it by deeming the person an "obvious" exception to the group that they despise. On the other hand, it could also lead to Love Redeems with the character abandoning their old prejudices, with some possible Unfortunate Implications. If the entire society is in on the discrimination, it may result in a Forbidden Love relationship. In Real Life and more realistic works however, there is usually no redemption for the bigot. Indeed, many people are interested in a certain group precisely because they consider those people inferior and/or Squicky: which usually leads to a Destructive Romance, if it is pursued.

A possible Sub-Trope of Villainous Crush, and a definite subtrope of Bigotry Exception and Inconvenient Attraction. A supertrope to Armored Closet Gay and If It's You, It's Okay. Compare Boomerang Bigot and You Are What You Hate for when they are a member of the group they are prejudiced against. Also compare Not Like Other Girls (specifically when a misogynistic man says that to a woman he likes) and You Are a Credit to Your Race. See also Race Fetish. Contrast Star-Crossed Lovers, where the lovers aren't bigoted themselves but can't be together because they are from bigoted groups.

Sadistic Nazi commandant Amon Goeth has a crush on his Jewish maid, Helen. He can't express it due to it being taboo in Nazi Germany, so he takes out his frustration by physically and emotionally abusing her.

Sadistic Nazi commandant Amon Goeth has a crush on his Jewish maid, Helen. He can't express it due to it being taboo in Nazi Germany, so he takes out his frustration by physically and emotionally abusing her.