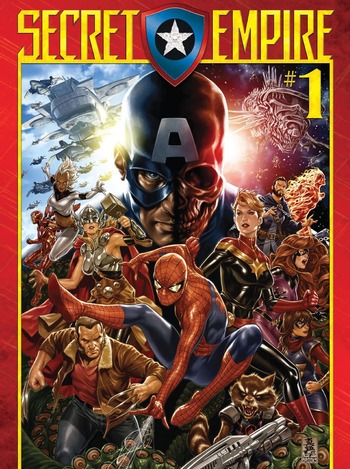 Secret Empire is the 2017 Marvel Comics Crisis Crossover event, spinning off from the events of Captain America: Steve Rogers and Civil War II.

During the events of Avengers Standoff, Steve Rogers had his youth and Super Soldier serum restored and, at the behest of the replacement Captain America Sam Wilson, returned to duty as the other Captain America. However, what no one knew was that the one who restored Captain America, the young humanoid Cosmic Cube Kobik, had actually transformed Steve into a sleeper agent of the terrorist organization HYDRA via Cosmic Retcon.

After the events of Civil War II, Maria Hill was removed as Director of S.H.I.E.L.D. and Steve was installed as Director after Sharon Carter passed up the offer.

However, that was a VERY bad thing - with Steve at the controls, he seeks to further his goals to rescue HYDRA from itself and take over the world. Now the heroes, broken by the events of said Civil War, must unite to save the day. Can they stop this HYDRA vs. HYDRA civil war and save Steve Rogers from himself?

The main series was a ten-issue mini-series that started with an issue 0 in April, then continued on bi-monthly until August. There were multiple tie-ins involving, at the very least, X-Men, Spider-Man, The Avengers, Champions, Guardians of the Galaxy, The Inhumans and The Defenders.

Directly following this event was Generations (Marvel Comics), which led to a new rebranding for Marvel, known as Marvel Legacy.
Advertisement:

Examples of tropes in Secret Empire include: