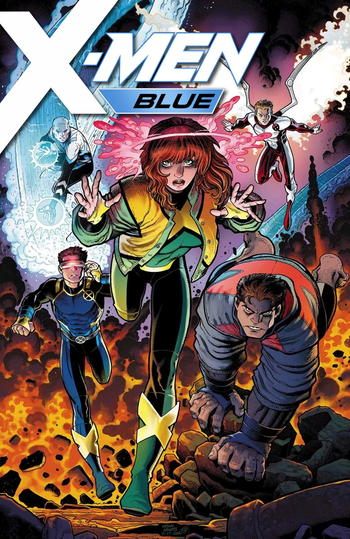 X-Men: Blue is a comic book published by Marvel Comics, launching under the post-Inhumans vs. X-Men ResurrXion umbrella of X-Men titles, and serves as a follow-up to All-New X-Men and All-New X-Men (2016). It is written by Cullen Bunn and drawn by Jorge Molina.

After a fraught number of years for the X-Men, including near-extinction, as well as wars with both The Avengers and The Inhumans, mutantkind has reached a livable point of stability. While still hated and feared by the larger world, the X-Men find themselves in a unique position to fully take advantage of their new lease on life.

While sister title X-Men: Gold focuses on the new flagship X-Men team led by Kitty Pryde, Blue features the time-displaced X-Men —Cyclops, Jean Grey, Iceman, Beast, and Angel— under none other than Magneto's tutelage. Despite their unlikely partnership, the O5 need Magneto as much as he needs them — especially when a familiar stranger from another universe shows up to further complicate things. The series ended after 36 issues, with the team moving on to the Extermination event.

See also: X-Men: Red, another color-based team title of this era, led by the resurrected Jean Grey. X-Men: Black, an anthology series set after the events of X-men: Blue which follows six villains including Apocalypse.