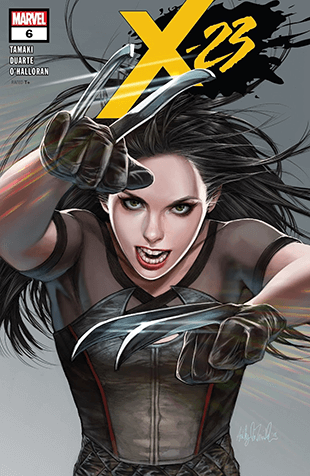 Laura Kinney, a.k.a. X-23, is a character owned by Marvel Comics, and created by Craig Kyle and his writing partner Christopher Yost. The character first appeared in two episodes of X-Men: Evolution in 2003 as an alternative to giving Logan more focus or using other Marvel heroes, X-23 quickly became an Ensemble Dark Horse and was written into the comics the following year. She made her comics debut with NYX #3 (February, 2004), featuring a similar background to her Evolution counterpart except even Darker and Edgier.

X-23 was created by the Weapon X offshoot known as the Facility,note HYDRA in Evolution using a damaged sample of Wolverine's DNA. The damage was greatest on the Y chromosome, so after several attempts at a direct clone Dr. Deborah Risman in Evolution, and the similar Dr. Sarah Kinney in the comics, eventually had the brilliant idea to create a female copy instead by duplicating the X chromosome. At last the 23rd attempt to create the female clone of Weapon X was successful, thus X-23. For years, she was thought to be a clone of Logan, but it was eventually revealed Sarah used some of her own DNA to complete the damaged sample, making X-23 Logan's biological daughter.

She grew up being trained to be an assassin, so that the Facility could sell her talents to the highest bidder. X-23 endured severe emotional and physical abuse in order to remove such weaknesses as emotion and self worth. Her creator, the one scientist who treated her like a child, tried to free her, but X-23 had been conditioned with a special "trigger scent" that would forcefully throw her into a Berserker Rage, forcing X to kill her. In her dying words, Dr. Kinney named her Laura.note She was never given a name onscreen other than X-23 in Evolution

After tracking down Logan she was invited to join the X-Men, and has been a mainstay in the X-Men books ever since. X-23 became a Breakout Character after her introduction, and is perhaps the most successful and popular X-Man introduced during the 2000s.

She made her live-action debut in Logan, the third Wolverine-focused movie in the X-Men film series, portrayed by Dafne Keen. For tropes specific to her movie incarnation, see this page.

Appearances In Other Media

The following tropes apply to X-23's solo ongoings and miniseries 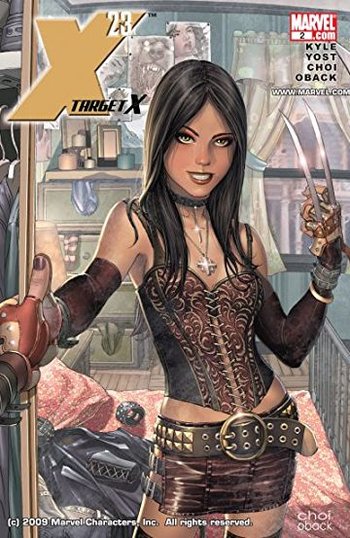 The second miniseries by Christopher Yost and Craig Kyle, Target X was a 6-issue series running from March to June 2005. It served as Part 2 of her origin story, continuing the story of Laura's escape that began in Innocence Lost.

Unlike the former series, Target X brings Laura much more into contact with the larger Marvel universe. Wolverine, Daredevil, and Captain America all play significant roles; indeed her interrogation by the latter two forms a framing story for the rest of the story. It also retcons Laura's first introduction to Logan, showing her meeting him under completely different circumstances than their encounter with Claremont's Uncanny X-Men, while also skirting around her appearance in NYX. 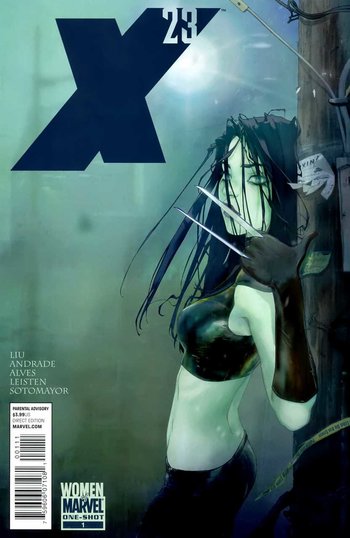 Both written by Marjorie Liu, X-23 ran for 21 issues from November, 2010, through May 2012. This series followed Laura on a journey of self-discovery in the aftermath of Second Coming and her stint on X-Force. Confused as to her purpose when Wolverine removes her from the team so she can finally try to heal from her dark past, Laura decides there are too many voices all telling her what to be, so leaves Utopia to find her own answers.

Although not part of this series, Liu also wrote a one-shot story featuring Laura released in May, 2010 which nonetheless was closely connected thematically. It finds Laura reuniting with Kiden Nixon, and fighting the influence of the Gamesmaster, who has decided to take up residence in her head.

Both stories are generally well-regarded, and did a great deal to advance and develop Laura as a character, particularly by expanding her beyond the influence of her creators, Christopher Yost and Craig Kyle. Liu's series codified many aspects of Laura's personality for readers, and this book is often now considered the standard by which other writers are compared. This has led to some fracturing of the fanbase over what Laura should read like, (particularly Liu's Spock Speak versus more naturalistic speech patterns) as well as mixed reactions once word of Liu's Creator Breakdown came out, leading to questions of whether she allowed her personal issues to affect the final few stories of the series. 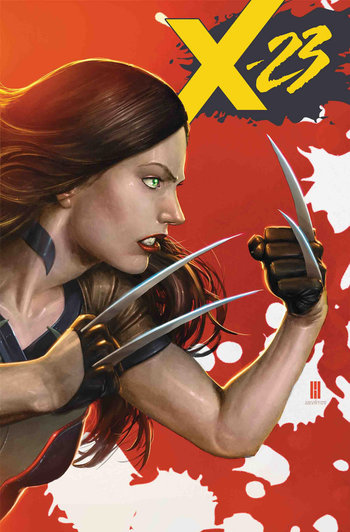 Written by Mariko Tamaki, a second volume of X-23 replaced All-New Wolverine as part of Marvel's Fresh Start relaunch. It launched in July, 2018, and sees Laura return to her roots to prevent anyone else from suffering as she had.