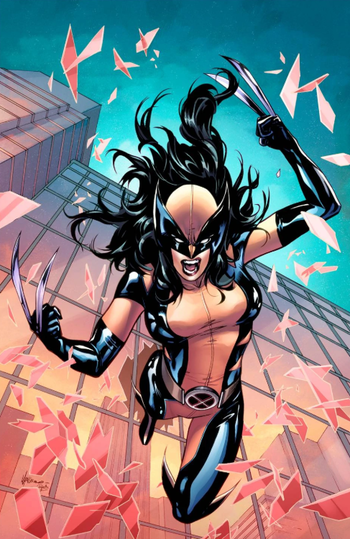 The best there is at what she does.
Advertisement:

All-New Wolverine is a 2015 Marvel comic book, published as part of the All-New, All-Different Marvel initiative after Secret Wars. It's written by Tom Taylor, with art for the first arc provided by David Lopez. Following the conclusion of the first arc, Lopez was succeeded by Marcio Takara, while Ig Guarra assumed art duties beginning with the Civil War tie-in. Nik Virella took over as series artist for "Enemy of the State II".

This title doesn't star Logan — the original Wolverine — but rather, his young clone daughter Laura Kinney, formerly known as X-23. Set sometime after Secret Wars, All-New Wolverine follows Laura as she takes up her progenitor's mantle and figures out what it means to be Wolverine while still being true to herself.

In her first venture under the cowl, she meets The Sisters: a trio of young women (Gabby, Zelda, and Bellona) Alchemax Genetics, a division of Alchemax, produced as clones of Laura herself. Though wary of them at first, Laura soon grows protective over her genetic sisters, working to give them, especially the youngest, some semblance of a normal life. She later gets embroiled with the satellite events of the Second Superhero Civil War, faces an enemy from her past bent on using her for bid to gain control of Madripoor, and an alien plague ravaging New York.

In April, 2017, a "soft" relaunch began as part of ResurrXion, with Laura gaining an armored black-and-gray costume based more on her X-Force outfit, and art by Leonard Kirk. The book ended in May, 2018, with issue 35. It will be replaced in July with a new X-23 series, written by Mariko Tamaki, and with an art team of Juan Cabal and Nolan Woodward