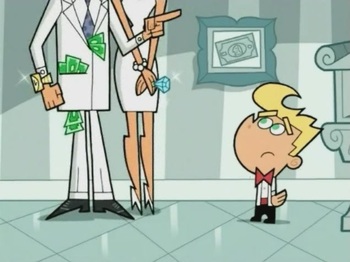 In cartoons, kids are portrayed as being way shorter than adults, even kids who are 7 to 12 years in age. In real life, 7-year-olds are on average 4 feet tall and even 2-year-olds average 50% of their adult height

, but in cartoons, 8- to 11-year-olds are often drawn to be only half adult height. Although children are rather small before they talk, it doesn't stay this way for long in real life (unless, e.g., they have dwarfism, but that's another story entirely), especially when puberty sets in and they outgrow clothes faster than they get new ones. In some cartoons, however, it's much more exaggerated. Even 10- and 11-year-olds only appear 2 feet tall, meaning they'd be towered over by the average 2-year-old.

Usually, this is done as an exaggeration and to play around for fun with. Because children often feel overpowered by their parents and other adults, they're drawn much shorter. Especially when it's told from their point of view. Sometimes, all that's visible of their parents are their legs. Bully and jock characters tend to be shown at heights that are more realistic for their age, however.

This trope is not quite omnipresent; sometimes children are scaled to a more realistic size. Still, it's prevalent enough that averting the trope may lead to the audience being confused about how old a child character is actually supposed to be. And sometimes it's even justified by the Super-Deformed art style of a work.

Teens Are Short refers to simply having most teens be identified by being shorter than adults, especially in Dawson Casting. This applies to 4- to 12-year-old children being ridiculously small for their age, to the point that they are only as tall as toddlers. Classic cartoons often invert this trope and Teens Are Short for laughs.

This is seen to a much smaller degree in live-action, where smaller actors may be chosen instead of a taller actor.

Related to Animation Anatomy Aging. Teens Are Short is the teenage version. Compare Miniature Senior Citizens. Also see Tiny Schoolboy which shows the types of preteen/teenage boys that suffer through this trope.