Video Game / The Last of Us 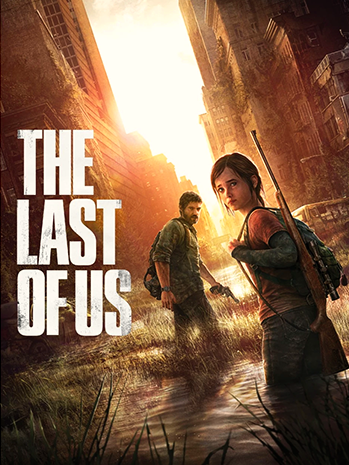 "To the edge of the universe and back. Endure and survive."
"I've struggled for a long time with surviving. But no matter what, you keep finding something to fight for."
— Joel
Advertisement:

In late 2013, the majority of human civilisation is destroyed by a highly contagious fungal infection that rapidly transforms its victims into aggressive and mindless monsters. Twenty years later, the last remnants of humanity either live under the strict martial law of "quarantine zones" or in scattered settlements trying to scavenge a living within a dangerous and hostile world.

Joel is a bitter and amoral Shell-Shocked Veteran who gets by as a smuggler working out of the Boston Quarantine Zone with his partner-in-crime Tess. When a weapons deal goes wrong, Joel is given one last chance to salvage the goods: by striking a deal with the radical Fireflies to smuggle a fourteen-year-old girl named Ellie out of the city. What appears to be a simple job turns into a country-wide trek across the ruins of America in pursuit of what could be a cure to the infection that plagues humanity, plighted not only by the Infected but also by the worst that humanity has to offer.

On February 14, 2014, a single-player DLC titled Left Behind was released. Acting as a pre- and inter-quel, it focuses on two timelines: firstly, it follows Ellie and her best friend Riley a few weeks before the central plot starts; and secondly, it fills in the Time Skip between Fall and Winter. Please note that, due to whiting out issues, main story spoilers will be unmarked in the DLC folder.

In March 2014, it was announced that Sam Raimi would be producing a big-screen adaptation of The Last of Us, with rumors at that year's Comic-Con that Game of Thrones' Maisie Williams was in talks to play Ellie. Unfortunately, Druckmann mentioned that was stuck in Development Hell for a few years before ultimately getting cancelled all together in early 2017. In March 2020, it was announced that ND and Playstation Productionsnote The new division of Sony Interactive Entertainment intended to adapt PlayStation games and IP to film and television were working with HBO to turn the game into a TV series, which is now set to premiere in 2023.

On June 9, 2022, it was announced that the game was being remade for the PlayStation 5 and PC under the name The Last of Us Part I, with the PS5 version coming out on September 2, 2022. This version is visually on par with The Last of Us Part II, as well as containing that game's gameplay upgrades to the stealth and fighting mechanics.

Left Behind DLC
American Dreams
"It can't be for nothing."
Feedback

After waking up to find Ellie missing, Joel violently interrogates some Hunters in order to find out where they have taken her.

Alternative Title(s): The Last Of Us Part I

After waking up to find Ellie missing, Joel violently interrogates some Hunters in order to find out where they have taken her.