Characters / The Last of Us

This is the character sheet for Naughty Dog's The Last of Us and The Last of Us Part II. Per the wiki's spoiler policies all trope names will be visible and there will be plenty of unmarked spoilers. Read at your own risk.
open/close all folders

Joel
See The Last of Us – Joel and Ellie for Joel's character page. 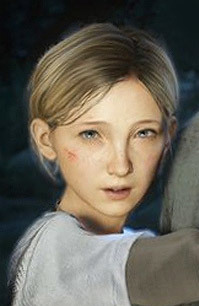 Joel's daughter. She died on the night of the outbreak. 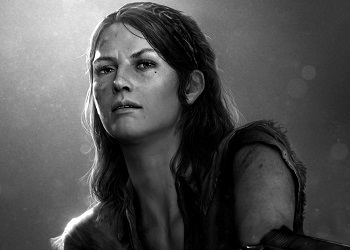 Joel's "partner" in crime while he's in Boston. It's implied that they were an item some time before. 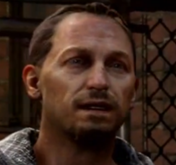 Joel and Tess's former supplier. Due to his many debts, he screws them over on a deal and tries to have them killed.

A settlement of survivors who have resorted to cannibalism in order to survive. 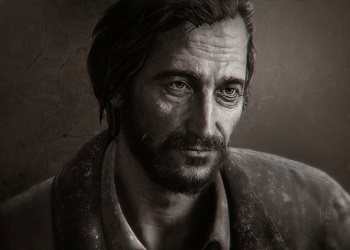 "Everything happens for a reason."
Voiced By: Nolan North (English), Toru Okawa (Japanese), Pedro Ruiz (Latin American Spanish), Fernando de Luis (European Spanish), Sergey Chudakov (Russian), Dariusz Toczek (Polish)
"You know I love how you think that you're better than this. Better than us. But you're not."

Leader of a pack of scavengers in Colorado, with whom Ellie briefly teams up. He turns out to be a cannibal, while the people Joel and Ellie fought in the university were members of his group.

David's right-hand-man and a fellow member of the cannibal faction. Though loyal enough, he's increasingly dissatisfied with David's attitude, and overrides his leadership several times. 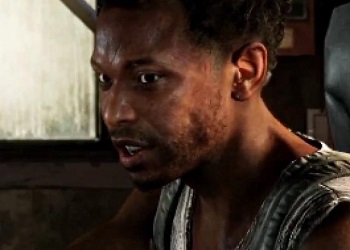 A survivor from Hartford, Connecticut encountered in Pittsburgh who travels with his little brother Sam in search of a Firefly outpost. 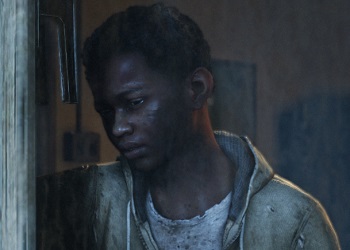 In General
A religious cult practicing Human Sacrifice in Part II, founded by a woman known as the Prophet and currently led by the Elders. They’re in a long running war with the WLF and live on an island known as Haven which is the Queen Anne neighborhood of Seattle that’s been flooded out in the ensuing years.
Isaiah 6.2-6.4:Seraph angels stood around him. Each angel had six wings. They used two wings to cover their faces, two wings to cover their bodies, and two wings to fly. The angels were calling to each other, “Holy, holy, holy is the Lord All-Powerful. His Glory fills the whole earth.” The sound was so loud that it caused the frame around the door to shake, and the Temple was filled with smoke.
The Prophet

Voiced By: N/A
"May she guide me through the storm. May she keep me calm."

The founder of the Seraphite cult and the creator of their religion. Her followers worship her as a god after her death and seek to carry on her fanatical ideas. 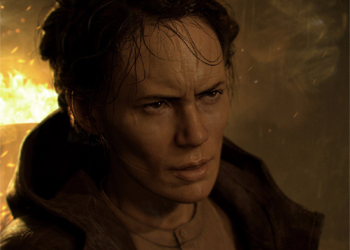 A dedicated Seraphite and mother of Yara and Lev. 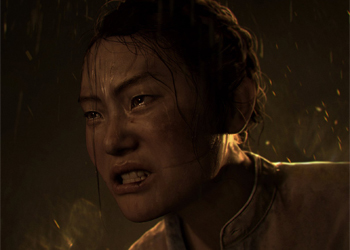 A young former Seraphite on the run with her brother.

A young former Seraphite on the run with his sister. 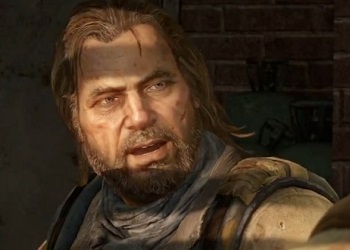 "It's the normal people that scare me."
Played By: W. Earl Brown (English), Atsuki Tani (Japanese), Lucas Medina (Latin American Spanish), Luis Bajo (European Spanish), Alexander Novikov (Russian), Jacek Jarzyna (Polish)
"Once upon a time, I had somebody that I cared about... It was a partner. Somebody I had to look after. And in this world, that sort of shit's good for one thing: Gettin' you killed. So you know what I did? I wizened the fuck up, and realized it's got to be just me."

A mysterious survivor, who is never actually met face to face. Avoided the infection by staying on his boat, but eventually ran aground and decided to hack it as a survivor.

A nameless soldier in the US military at the very start of the outbreak.

Dina and Jesse's son, of whom Dina gave birth to during the Time Skip. He is raised by his mother and Ellie on a farm. 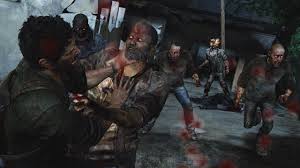 Tropes that apply for all of them:
Runners 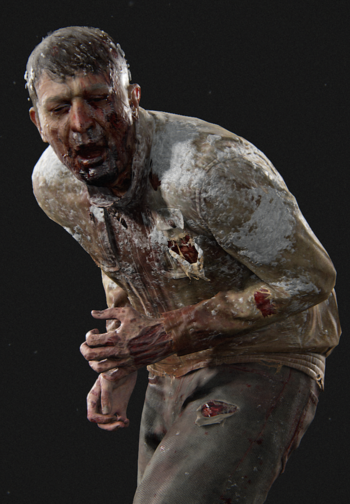 Freshly turned Infected who attack with their hands. They still look - and, disturbingly, sound - the most human.
Stalkers 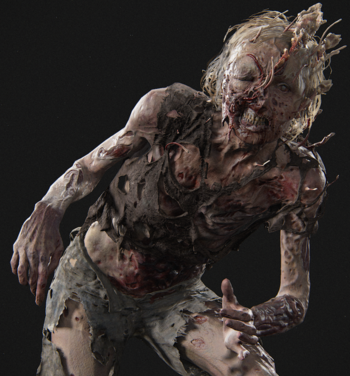 Slightly aged Infected with fungi starting to grow out of their heads. Surprisingly intelligent, their fighting style is more ambush oriented.
Clickers 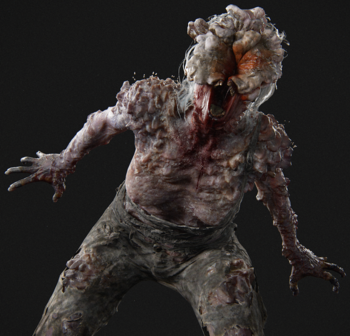 Aged Infected whose infection has turned their head into layers of fungus. Their eyesight lost, they sense their surroundings through echolocation.
Bloaters 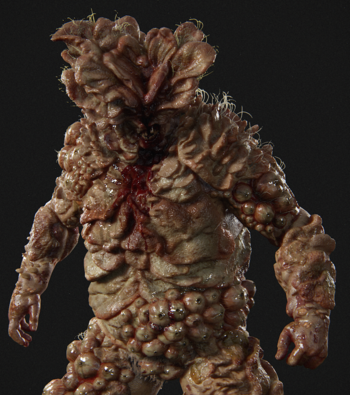 The oldest of the Infected, the fungus has created something akin to armored plating covering their bodies. They can pluck spore pods from their body to throw at whoever or whatever they're fighting. These are the least common of the Infected since they take over a decade to develop.
Shamblers 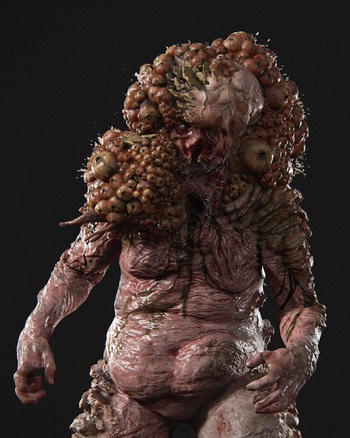 Introduced in Part 2, these large specimens can release clouds of acid from pustules on their body, either voluntarily or in their death throes.
Spoiler Type 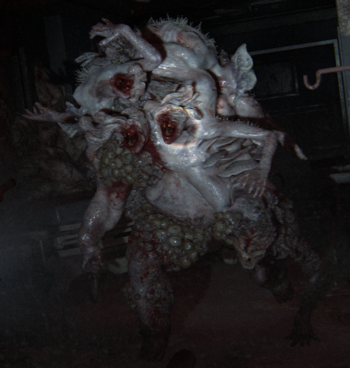 St. Mary's Hospital was Ground Zero for the outbreak in Seattle. As a result of years left alone together with the Cordyceps growing between them, several Infected have fused together into this breed.

A horse initially owned by Tommy in Jackson, Wyoming and given to Joel and Ellie to help them travel to the Fireflies. He is later shot and killed by David's men at the Lakeside Resort.

The protagonist of Ellie's favorite comic book series Savage Starlight. Her discovery of Faster-Than-Light Travel escalates into her having to fight an Alien Invasion of beings called The Travelers.

The Captain of the Kobyashi, and later leader of Last Watch. He becomes Dr. Daniela Star's closest ally in fighting back the Alien Invasion of The Travelers.

The remnants of the United States Military have become increasingly despotic.

Hostile survivors that dwell in Pittsburgh. They're named after their tendency to murder any "tourists" who enter their territory so they can loot their bodies of any supplies.

A pack of para-military hunters based out in Santa Barbara, California. Found in Part II.

A paramilitary group based in New Mexico.

Alternative Title(s): The Last Of Us Part II