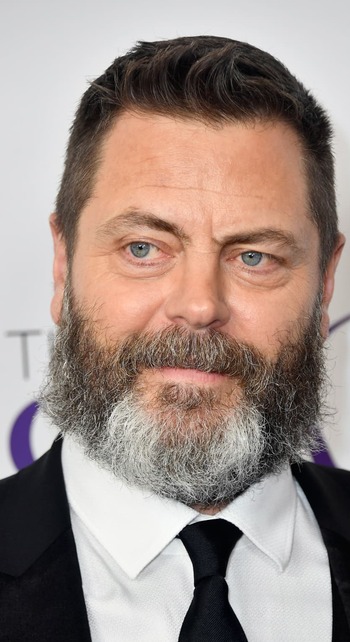 "Make the rest of your life happy. For me, when I started dating Megan [Mullally], my auditions became so much better, because I knew that when I came home from the audition I got to kiss her. I didn't give a damn about the audition nearly as much, and that gave me a sense of confidence."
— Nick Offerman on starting an acting career.
Advertisement:

Nicholas "Nick" Offerman (born June 26, 1970 in Joliet, Illinois) is an American actor. He has had a steady acting career in film and TV since 1997, but his Star-Making Role was Ron Swanson on Parks and Recreation. He's well known for his distinctive Badass Baritone and deadpan delivery. He is also an accomplished woodworker and has showcased his abilities on Parks and Recreation and Last Call with Carson Daly.

He has been married to Megan Mullally since 2003.

I hate tropes. Tropes are stupid.