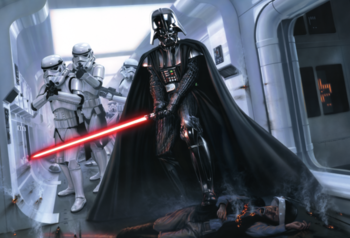 You don't see the Emperor slaughtering rebels —
you see this guy.
"Every search for a hero must begin with something that every hero requires: a villain."
— Dr. Nekhorvich, Mission: Impossible II
Advertisement:

In theatre jargon, the Heavy is the character that provides the most conflict in the story. The heavy is The Antagonist that creates obstacles for The Protagonist to overcome. At least to the audience, this character type is the face of the opposition to the protagonist.

In other words, this is the antagonist with the most screen time, the one that the audience is most familiar with as a character. This is the origin of the trope name, which comes as far back as the 1800s. The Heavy is a big role for an actor, sometimes the biggest role in the work, eclipsing even the main character. This means that the Heavy tends to have the most lines, and therefore the heaviest script.

The Heavy is an antagonist trope, not a villain trope, so this can be a Hero Antagonist standing in the way of a Villain Protagonist just as easily as being an Ineffectual Sympathetic Villain all the way up to the Big Bad. The Heavy can act as The Dragon, as keeping the Big Bad out of the limelight makes them more mysterious, and thus scarier. That role often overlaps with a Non-Action Big Bad, where the Heavy is providing the muscle. But it is the relation of the Heavy to the audience that defines this type, not the interaction with the Protagonist.

Not to be confused with the band of the same name, or the Heavy Weapons Guy, though a skilled player can certainly MAKE him qualify. Also not to be confused with The Big Guy, although the two can overlap, or with The Load or The Millstone. Any equivalent character in the form of your most reliable party member would more than likely qualify as a Game-Breaker.

Also not to be confused with a Dragon-in-Chief, although there is overlap. The difference is a Dragon-in-Chief by definition is the real main threat of the story, with the Big Bad they work for either too ineffectual or incompetent without the Dragon-in-Chief's aid. The Heavy could easily be a disposable pawn in the grand scheme of things, but still have the most screen time or largest role in the plot.